By Tom Engelhardt and James Carroll 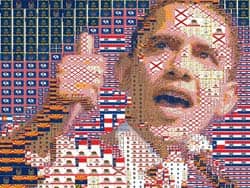 James Carroll is a man who knows something about the dangers of mixing religious fervor, war, and the crusading spirit, a subject he dealt with eloquently in his book Constantine's Sword: The Church and the Jews. A former Catholic priest turned antiwar activist in the Vietnam era, he is a weekly columnist for the Boston Globe, and was perhaps the first media figure to notice -- and warn against -- a presidential "slip of the tongue" just after 9/11, when George W. Bush referred briefly to his new Global War on Terror as a "crusade." He was also possibly the first mainstream columnist in the country to warn against the consequences of launching a war against Afghanistan in response to those attacks -- the disastrous results of which we now see daily.

Carroll's focus on fundamentalist religion and violence is long standing. In print and in other ways, he has spoken out and worked against militarism and intolerance, and has focused on the ways in which religion and violence are increasingly merging into a toxic brew capable of setting our planet aflame. Most recently, he's publicly put both his own practice of Catholicism and the perilous state of his church -- perched as it is at the edge of a fundamentalist precipice with a new pope who threatens to push it into the void -- under a microscope.

In his latest book, Practicing Catholic, he offers a liberal's vision of that faith, and argues that 21st-century agendas of peace and justice urgently need the rescue of the Catholic Church from its reactionaries. It's a message that certainly resonates with this a-religious Jew from New York married to an ex-Catholic from Texas, especially when Carroll puts it with his usual eloquence. Who better, then, to consider the uproar over Barack Obama's appearance at Notre Dame?

Cheer, Cheer for Old Notre Dame
A War of Words That Folds Neatly into the New Century's War of Weapons

President Obama goes to Notre Dame University this Sunday to deliver the commencement address and receive an honorary degree, the ninth U.S. president to be so honored. The event has stirred up a hornet's nest of conservative Catholics, with more than 40 bishops objecting, and hundreds of thousands of Catholics signing petitions in protest. In the words of South Bend's Bishop John M. D'Arcy, the complaint boils down to President Obama's "long-stated unwillingness to hold human life as sacred." Notre Dame, the bishop charged, has chosen "prestige over truth."

Not even most Catholics agree with such criticism. A recent Pew poll, for instance, shows that 50% of Catholics support Notre Dame's decision to honor Obama; little more than one-quarter oppose. It is, after all, possible to acknowledge the subtle complexities of "life" questions -- When actually does human life begin? How is stem cell research to be ethically carried out? -- and even to suggest that they are more complex than most Catholic bishops think, without thereby "refusing to hold human life as sacred."

For many outside the ranks of conservative religious belief, this dispute may seem arcane indeed. Since it's more than likely that the anti-Obama complainers were once John McCain supporters, many observers see the Notre Dame flap as little more than mischief by Republicans who still deplore the Democratic victory in November. Given the ways in which the dispute can be reduced to the merely parochial, why should Americans care?

Medievalism in Our Future?

In fact, the crucial question that underlies the flap at Notre Dame has enormous importance for the unfolding twenty-first century: Will Roman Catholicism, with its global reach, including more than a billion people crossing every boundary of race, class, education, geography, and culture, be swept into the rising tide of religious fundamentalism?

Those Catholics who regard a moderate progressive like Barack Obama as the enemy -- despite the fact that his already unfolding social and health programs, including support for impoverished women, will do more to reduce the number of abortions in America than the glibly pro-life George W. Bush ever did -- have so purged ethical thought of any capacity to draw meaningful distinctions as to reduce religious faith to blind irrationality. They have so embraced a spirit of sectarian intolerance as to undercut the Church's traditional catholicity, adding fuel to the spreading fire of religious contempt for those who depart from rigidly defined orthodoxies. They are resurrecting the lost cause of religion's war against modernity -- a war of words that folds neatly into the new century's war of weapons.