If the Catholic reactionaries succeed in dominating their church, a heretofore unfundamentalist tradition, what would follow? The triumph of a strain of contemporary Roman Catholicism that rejects pluralism, feminism, clerical reform, religious self-criticism, historically-minded theology, and the scientific method as applied to sacred texts would only exacerbate alarming trends in world Christianity as a whole, and at the worst of times. This may especially be so in the nations of the southern hemisphere where Catholicism sees its future. It's there that proselytizing evangelical belief, Protestant and Catholic both, is spreading rapidly. Between 1985 and 2001, for example, Catholic membership increased in Africa by 87%, in Europe by 1%.

In their shared determination to restore the medieval European Catholicism into which they were born, Popes John Paul II and Benedict XVI became inadvertent avatars of the new Catholic fundamentalism, a fact reflected in the character of the bishops they appointed to run the Church, so many of whom now find President Obama to be a threat to virtue. The great question now is whether this defensive, pre-Enlightenment view of the faith will maintain a permanent grip on the Catholic imagination. John Paul II and Benedict XVI may be self-described apostles of peace, yet if this narrow aspect of their legacy takes hold, they will have helped to undermine global peace, not through political intention, but deeply felt religious conviction.

No one can today doubt that the phenomenon of "fundamentalism" is having an extraordinary impact on our world. But what precisely is it? Some fundamentalists pursue openly political agendas in, for instance, Northern Ireland, Israel, and Iran. Some like Latin American Pentecostals are apolitical. In war zones like Sudan, Afghanistan, Palestine, and Sri Lanka, fundamentalism is energizing conflict. Most notably, after the Bush administration's invasion of Iraq in 2003, the insurgent groups there jelled around fundamentalist religion, and their co-extremists are now carrying the fight, terrifyingly, in the direction of the nuclear arsenal of Pakistan. Catholic fundamentalists in the U.S. are far from being terrorists, but an exclusionary, intolerant, militant true belief is on display this week in their rallying to denounce President Obama in Indiana.

Obviously, these manifestations are so varied as to resist being defined by one word in the singular, which is why scholars of religion prefer to speak of "fundamentalisms." But they all do have something in common, and it is dangerous. The impulse toward fundamentalism may begin with fine intentions: the wish to affirm basic values and sources of meaning which seem threatened. Rejecting any secular claims to replace the sacred as the chief source of meaning, all fundamentalisms are skeptical of Enlightenment values, even as the Enlightenment project has developed its own mechanisms of self-criticism. But the discontents of modernity are only the beginning of the problem.

Now "old time religion" of whatever stripe faces a plethora of threats: new technologies, a shaken world economy, rampant individualism, diversity, pluralism, mobility -- all that makes for twenty-first century life. The shock of the unprecedented can involve not only difficulty, but disaster. And fundamentalisms will especially thrive wherever there is violent conflict, and wherever there is stark poverty. This is so simply because these religiously absolute movements promise meaning where there is no meaning. For all these reasons, fundamentalisms are everywhere.

In contemporary Roman Catholicism, whose deep traditions include the very intellectual innovations that gave rise to modernity -- Copernicus, after all, was a priest -- Catholic fundamentalists are more likely to be called "traditionalists." They are galvanized now around the moral complexities of "life," at a time when the very meaning of human reproduction is being upended by technical innovation, and once-unthinkable medical and genetic breakthroughs are transforming the meaning of death as well.

Like other fundamentalists, they are attuned to the dark consequences of the Enlightenment assumptions implied in such developments, from the Pandora's Box opened by science unconnected to morality to the grotesque inequities that follow from industrialization and, more recently, globalization. Where others celebrate new information technologies, traditionalists, even while using those technologies, warn of the coarsening of culture, the destruction of privacy, and, especially, threats to the family.

In nothing more than its emphasis on a rigorous and comprehensive sexual ethic -- anti-feminist, radically pro-life, contemptuous of homosexuality -- does this brand of Catholicism echo a broader fundamentalism.

In the immediate aftermath of the liberalizing Second Vatican Council (1962-1965), Catholic traditionalists, with their attachment to the Latin Mass, fiddle-back vestments, clerical supremacy, and the entire culture of the Counter-Reformation, were rebels. That was why the anti-Council sect, the Lefebrites, including the notorious Holocaust denier Bishop Richard Williamson, was excommunicated in 1988. 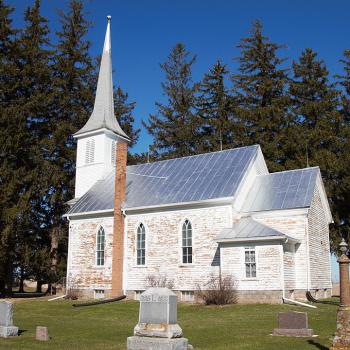 The American Christians Who Couldn't Worship in Their Own Language
Chris Gehrz
Get Patheos Newsletters
Get the latest from Patheos by signing up for our newsletters. Try our 3 most popular, or select from our huge collection of unique and thought-provoking newsletters.
From time to time you will also receive Special Offers from our partners that help us make this content free for you. You can opt out of these offers at any time.
see our full list of newsletters
Editor's picks See all columnists