The Fourth of July

The Fourth of July:
Celebrating Independence and Interdependence 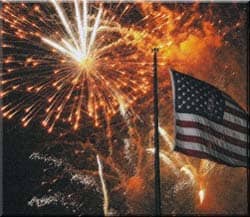 Even in progressive churches, congregants typically expect some recognition of national holidays. While there is good reason to affirm the Anabaptist separation of church and state as well as recognize the dangers of too-close ties between Christianity and the government, the doctrine of divine omnipresence, ironically, opens the door for experiencing holiness in the midst of national days of self-affirmation.

If God is present in all things, then the affairs of state, celebrating space as well as time, fit into God's vision for the whole earth. The history of Israel demonstrates how far nations can fall from God's purposes for communal life; but it also affirms the prophetic vision of healthy and just communities and nations. The ever-present God moves through every aspect of our lives. There are no godless zones, and that includes nations, governments, peacemaking, and military service. Despite our personal and communal turning away from God's vision of Shalom, God still moves through our lives, calling us to larger visions of ourselves and of our communities. Healthy spiritual formation involves infusing the "secular" with spiritual values, rather than reducing the spiritual to the secular.

Still, most preachers struggle to find the right balance of differentiation and critique, and affirmation and celebration, when it comes to the intersection of nation and congregation, especially in terms of national holidays. Given the fact that most congregants see a relationship between God and country, the wise pastor will seek to affirm national holidays while calling the congregation to go beyond nationalism and empire toward a just and peaceful realm.

Independence Day involves the recognition of important moments in our nation's story and the gifts we have received as citizens of our nation. While there is much to repent (and realities of genocide and slavery as well as the upsurge in racism and anti-immigrant sentiments should call us to confession and not denial), there is also much to celebrate in our -- and every nation's -- national adventure.  Our national parents were not perfect and from the vantage point of over two hundred years, their "sins" are obvious to us. But we might suspect that, in light of a higher vision of national life and global loyalty, our "sins," many of which are taken for granted as the norm, will be obvious to our successors. We may hope to receive as kind judgment from our successors as we give to our predecessors. We are all the children of our time and this is the source of both moral limitation and the possibility of moral achievement.

In the dialectical movement of not "too much" and "not too" little, when it comes to the relationship of Christianity and national holidays, let me suggest some spiritual practices for the Fourth of July. These will place our national celebration in light of the God's present and future vision for our nation and the earth.

First, let the Fourth of July be a day of prayer for our national leaders. In some congregations, it will be controversial to pray for Barack Obama and Nancy Pelosi; in others, it will be challenging to pray for John McCain and Mitch McConnell. But, our calling is to pray that our leaders find wisdom and self-transcendence. In this time of culture wars and national schism, we can pray for national wisdom and healing, reflected in commitment to dialogue, truth telling, and common cause.

Second, let us give thanks for the commitments, offerings, and sacrifices of our predecessors -- pacifists, soldiers, founding parents, and others who have shaped our national life. In our time, we are called to carry on their highest values. As I stated in my reflections on Memorial Day, it is contrary to the spirit of national holidays, celebrating the commitments of our predecessors, to elevate material gain, tax protests, and absolute rights to property and firearms over the well-being of the community. National holidays call us to common cause, not isolated individualism.

Third, let us affirm the diversity of our nation as a blessing and gift. All of us, including the native peoples, came from other lands. Affirming diversity in ethnicity, gender, sexual identity, is at the heart of our nation's ideals of life, liberty, and the pursuit of happiness (overall well-being). In a time of circling the wagons around "me and mine," we need to remember that we are a nation of immigrants. Communal synergy emerges in the integration of diversity with loyalty to a common cause.