Holy War: A Jewish Problem, Too 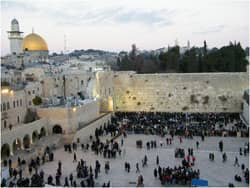 The overwhelming majority of Jewish authorities believe that the milhemet mitzvah, commanded war, is no longer viable today (since it was directed against biblical nations that no longer exist). However, according to one interpretation of a statement by the medieval scholar Nahmanides, the possibility of a contemporary milhemet mitzvah exists. In this article, Firestone explores his personal concerns with this situation.

A couple of years ago I proudly showed my new book, Jihad: The Origin of Holy War in Islam, to a Muslim colleague of mine, trained with a Ph.D. in an American university, and now the head of the Department of Contemporary Islamic Studies at al-Quds University in Jerusalem. He took one look at the title and turned to me with a look of pity and almost disgust on his face. "Reuven," he said, "you must know that there is no holy war in Islam!"

And there is no holy war in Judaism.

Fighting -- as we learn from Rabbi Saul Berman -- is not kadosh [holy]. Neither is it muqaddas, as my Muslim scholar friend told me. But if God commands war, if the authority to engage in fighting and inevitably mass killing is divinely inspired, is the act sanctified?

"Holy war" with all its connotations of mindless excess, fervent, and wild fanaticism, is not a Christian monopoly; the sooner Jews and Muslims acknowledge this fact, the better.

We Jews observe the acts and rhetoric coming from al-Qaida, Hamas, and Islamic Jihad and we know that qital (warring), or jihad (exerting great effort), or fi sabil Allah (in the path of God) is holy war. While such warring in Islam is governed by rational and ethical rules of engagement, just as "just war" theory in the West is governed by such rules (jus ad bellum, jus in bello), excess always abounds when the warrior knows that the cause or authority for fighting transcends the rationale or logic of the human mind.

The ecstasy of personal sacrifice in obeying God's will, of willingness literally to obliterate the self in the ultimate sacrifice of giving one's own life to the divine command, may lead to extraordinary valor or extraordinary atrocity.

Before dismissing the appalling behaviors of our Muslim cousins engaged in holy war, let us put our own house in order. Holy war has been revived among Israel the people and within Israel the state. Why is milhemet mitzvah/hovah obligatory war? Because God-the-Commander (haMetzaveh) requires it. Is it not a holy act to carry out God's command? Is there not an essence of kedushah [holiness] in the fulfillment of every mitzvah, large or small?

When the rabbis in Mishnah Sotah 8:7 categorized Israel's wars as obligatory or discretionary, they were attempting to define and dismiss a dangerous phenomenon that had twice in their memory brought devastation to the Jewish people. Both the great Revolt of 66 C.E. and the Bar Kokhba Rebellion of 132 C.E. -- two of the most horrific and catastrophic events that the Jewish people ever experienced -- were driven by Jewish holy war ideas.

After the Mishnah, Jewish holy war ideas lay virtually dormant for most of our exilic existence, though they were discussed briefly by certain medieval thinkers and appear in some of our apocalyptic and messianic writings. But holy war has been revived in contemporary Israel, especially among ultranationalist Orthodox settlers in Judea and Samaria (the West Bank) and their many supporters.

The war -- and it may now be accurately called a war between Israel and the Palestinians -- is defined by many religiously observant settlers and their supporters as a divine obligation to reclaim the whole of the Land of Israel as either a prelude to or as actually part of the messianic awakening.

Many in this camp cite ad nauseum the now famous statement of Nahmanides in his gloss on Maimonides' Book of Commandments (positive commandment 4), who teaches that the conquest and settlement of the Land of Israel lies in the category of obligatory war (milhemet mitzvah). "It is a positive commandment for all generations obligating every individual, even during the period of exile."