Is There a Hindu Fundamentalism? 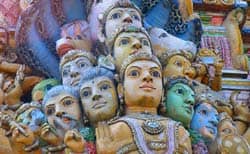 Fundamentalism is an easily discernible phenomenon in belief-oriented religions like Christianity and Islam that have a simple and exclusive pattern to their faith. They generally insist that there is only One God, who has only one Son or final Prophet, and only one true scripture, which is literally God's word. They hold that belief in this One God and his chief representative brings salvation in an eternal heaven and disbelief causes condemnation to an eternal hell. Muslims daily chant "there is no God but Allah and Mohammed is his (last) prophet." Most Christians, whether Catholic or Protestant, regard belief in Christ as one's personal savior as the only true way to salvation.

Fundamentalists are literalists in these traditions who hold rigidly to their beliefs and insist that since their religion alone is true, the other religions should not be tolerated, particularly in the lands where members of their religion are in a majority. Fundamentalists generally hold to their religion's older social customs and refuse to integrate into the broader stream of modern society, which recognizes freedom of religious belief.

Fundamentalism can usually be discriminated from orthodoxy in these traditions, but tends to overlap with it, particularly in the case of Islam. Most orthodox Christians and many orthodox Muslims tolerate those of other religious belief, though they may not agree with them, and are not involved in the militancy and social backwardness of fundamentalist groups.

They usually have little trouble functioning in modern society, though they may keep to themselves in matters of religion and still regard that theirs is the only true religion. The strictly orthodox in these religions, however, may not be very different than the fundamentalists and often support them.

While the news media of the Western world, and of India itself, speaks of Hindu fundamentalism, no one appears to have really defined what it is. Is there a Hindu fundamentalism comparable to Islamic or Christian fundamentalism? Using such a term merely assumes that there is, but what is the evidence for it? Are there Hindu beliefs of the same order as the absolute beliefs of fundamentalists in Christianity and Islam? It is questionable that, whatever problems might exist in Hinduism, whether fundamentalism like that found in Christianity or Islam can exist at all in its more open and diverse tradition, which has many names and forms for God, many great teachers and Divine incarnations, many sacred books, and a pursuit of self-realization that does not recognize the existence of any eternal heaven or hell. There is no monolithic faith called Hinduism with a set system of beliefs that all Hindus must follow that can be turned into such fundamentalism.

Hindus with their many names and forms for God don't mind accepting the Christian name God or even Islamic Allah as referring to the same reality, though they may not use these names in the same strict or exclusive sense as Christians or Muslims. A belief in God is not even necessary to be a Hindu, as such non-theistic Hindu systems as Sankhya reveal.

For those who speak of Hindu fundamentalism, we must ask the question: What One God do Hindu fundamentalist groups insist upon as the only true God, and which Gods are they claiming are false except for Him? If Hindus are not insisting upon the sole reality of the One Hindu God can they be called fundamentalists like the Christians and Muslims?

Islamic fundamentalists consider that Islam is the only true religion, that no true new faith can be established after Islam and that with the advent of Islam all previous faiths, even if they were valid up to that time, became outdated. Christian fundamentalists hold that Christianity alone is true, and that Islam and Hinduism are religions of the devil. Even orthodox people in these traditions may hold these views.