Living in the Sun: A Weekly Reflection

Here's a great take on this Scripture verse from Youtube! 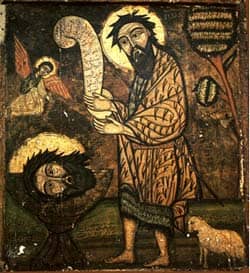 June 24th is the Feast of the Nativity of St. John the Baptist.  John the Baptist was a prophet who foretold the coming of the Messiah. Luke suggests that John was Jesus' cousin, but the other gospels make no such claim. He preached a baptism for the forgiveness of sins, and baptized Jesus in the Jordan River. He pointed to him as the one for whom the world was waiting:  "Behold the Lamb of God who takes away the sins of the world!"

John recognized his proper place in the story of salvation. Though a much acclaimed preacher and prophet, he was the herald of the Son:  "He must increase, but I must decrease!"

His feast on the 24th of June is one of the more interesting feasts of the Christian liturgical year. Most saints are only celebrated on the day of their death: their birth into eternity. But John is so important that his birth, like Christ's and Mary's, is celebrated with its own feast day. The feast comes three months after the Feast of the Annunciation on March 25th, when the Gospel tells us that Elizabeth, the mother of John, was already six months with child. John's birthday comes just a few days after the summer solstice, this year, on June 21st. The summer solstice is when, because of the tilt of the earth's axis, our hemisphere is closest to the sun, and hence, the day is the longest, and the night is the shortest. After the solstice, the days actually are getting shorter, and the nights are getting longer. So John's birth comes at that time of the year when the days are giving way to night:  "I must decrease . . ."

We live in a lot of darkness in our world: sin, evil, violence, a disrespect for creation, unforgiveness, hatred, war, hunger, and poverty are everywhere. Sometimes, it can feel as though the darkness is swallowing us up . . .

In those moments, go outside, point your face toward the summer sun and give thanks that winter never wins. The Sun is always there, warming us, and making us whole . . .