Most outsiders to Hinduism with a limited understanding of the tradition tend to have a somewhat static and orthodox view of it, since this is often what is presented in textbooks and in mass media depictions. The typical western portrayal has often been of a priestly dominated hierarchical religion with a strict caste system, the worship of multiple deities and animals, diverse and bizarre rituals, and marginalized groups that include women and the low caste.

In reality, Hinduism today has a widely divergent set of beliefs and practices, with a myriad of regional variants that date back centuries. It is the product of several millennia of development with ever-expanding views, understandings, beliefs, and speculations about the world, ultimate reality, and what humanity's role and purpose in all of it is. Like distinct patches on a quilt, these disparate elements are connected by key concepts that can be found throughout the broader tradition.

These unifying concepts include a belief in karma and reincarnation, the importance of non-violence, an essential respect for life in its many forms, and a belief in the acceptance and tolerance of diverse religious beliefs as different paths up the same divine mountain. The reason these concepts are finding increasing popularity in the west is that they resonate with the contemporary thinking of many who are looking for a spirituality that transcends narrow sectarian ideologies. In the process, there is a changing perception of the tradition in the eyes of many.

In a 2009 Newsweek article entitled, "We Are All Hindus Now," Lisa Miller notes that although the vast majority of Americans continue to identify with Christianity, at the same time we "are slowly becoming more like Hindus and less like traditional Christians in the ways we think about God, our selves, each other, and eternity." These are pivotal issues, and more and more westerners are coming to view the Hindu understanding of them as both rational and appealing. This does not mean there will be a large number of western converts to Hinduism anytime soon, but it does show the significant effect that Hindu thinking is having on the west.

The growing Indian Hindu community in America is also helping to bring about a more realistic view of the tradition. Its members are among the most educated and economically successful of any non-Christian religious group that has immigrated to America during the last several generations. Most members of the community are here as a result of the Immigration and Nationality Act of 1965, which abolished the National Origins Formula and removed restrictions that had limited the number of Indians who could immigrate. Since that time, hundreds of thousands of Indian Hindus have come to the U.S., become citizens, and started families, and the majority of their offspring self-identify as both American and Hindu. Thus, not only is America being influenced by Hinduism, but the reverse is true as well, and both stand to benefit from this relationship.

The American Hindu community has also built hundreds of temples and started various religious and cultural groups. Although many were founded primarily to cater to Hindus of Indian origin, doors have gradually been opened to active participation by non-Indian Hindus as well. In the early decades after the organization's founding, members of ISKCON (International Society for Krishna Consciousness), who were almost all non-Indian, avoided the label "Hindu" and were often seen as only marginally related to the tradition, at best. Their lifestyles and proselytization methods also tended to inspire a negative view of Hinduism as well. In the last two decades, however, the organization has changed its methodology and direction a great deal, its members have increasingly come to self-identify as Hindu, and it has also come to be accepted by most Hindus of Indian origin as a legitimate religious group with which they find affinity.

Among the more significant of organizations in the U.S. representing and providing a collective voice to the Hindu community is the Hindu American Foundation. Run primarily by second-generation Indian Americans who utilize both their Hindu and their American ideals, the organization has been quite successful in interacting with and educating public policy officials, academics, and the media about Hinduism both here and abroad. Several years ago, its efforts led to the official U.S. government recognition of Diwali as a Hindu holiday.

Hymns of Faith and Hope: They Cast Their Nets in Galilee
Jonathan Aigner
2 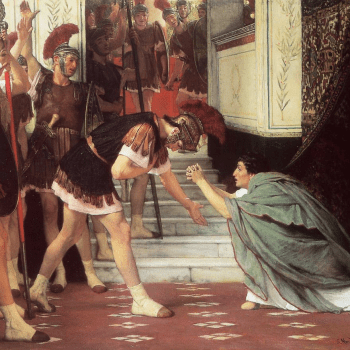 Outrageous!
Bert Bigelow
Get Patheos Newsletters
Get the latest from Patheos by signing up for our newsletters. Try our 3 most popular, or select from our huge collection of unique and thought-provoking newsletters.
From time to time you will also receive Special Offers from our partners that help us make this content free for you. You can opt out of these offers at any time.
see our full list of newsletters
Editor's picks See all columnists