The parsha (weekly Torah portion) for the week ending June 26 is Balak. Balak is sometimes defined as devastator and other times as vain, or empty in Hebrew and is a proper noun (a name). It is the second word (and first distinctive words) in the portion. Be sure to check out the video at the end of this article!

In this week's parsha, we meet the Moabite king named Balak. He has been following the exploits of the Israelites closely. After watching them defeat the Amorites in the last parasha, he gets nervous. So he calls on a prophet in his land named Balaam. He instructs Balaam to go out to where the Israelites are and curse them. Balaam isn't quite sure what to do. He vacillates back and forth for a while and Balak keeps sending more people with gold and riches to convince him to curse the Israelites. Finally, Balaam agrees to go.

So off Balaam goes to curse the Israelites. He is riding his donkey when all of the sudden, G-d sends an angel with his fiery sword drawn to prevent them from passing. Now, Balaam does not see this, but his donkey does. The donkey refuses to go past the angel so Balaam beats her. She keeps walking and the angel again moves into their path. Again, the donkey turns around and again Balaam beats her. Once again she turns back on the path. And again when she sees the angel, the donkey just lies down knowing she would be beaten by Balaam. Finally, G-d allowed the donkey to speak and tell Balaam what was going on. The angel chastised Balaam for beating his donkey and told him to keep going but he would be delivering a message from Hashem, rather than the curse that was intended. 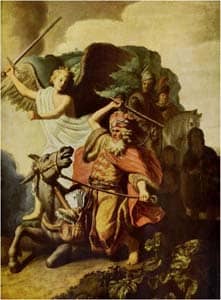 Balak went out to meet Balaam and his men to hear the curse, but Balaam informed him that he would only be able to say the words that G-d puts in his mouth. G-d instructs him to say, "How can I damn whom God has not damned, how doom when the Lord has not doomed? . . .  Who can count the dust of Jacob, number the dust-cloud of Israel? May I die the death of the upright, may my fate be like theirs!" (Numbers 23:6-10) Balak was angry! He had wanted Balaam to curse the Israelites, not bless and encourage them. But Balaam again tells him that he can only speak the words that G-d puts in his mouth.

Balak isn't thrilled with this news. He wants a recount. They return to the mountains were they had performed some sacrifices. They again do these sacrifices and G-d speaks to Balaam. He returns to Balak and says, "My message was to bless: When He blesses, I cannot reverse it. No harm is in sight for Jacob, no woe in view for Israel. The Lord their God is with them" (Numbers 23:17-21). Balak pleads with him, look you don't have to curse them but please just don't bless them. Balaam responds, "I say the words G-d puts in my mouth."

Once again Balaam blesses the people of Israel by saying, "How fair are your tents, O Jacob, your dwellings, O Israel! . . .They shall devour enemy nations, crush their bones, and smash their arrows. . . . Blessed are they who bless you, accursed they who curse you!" (Numbers 24:1-9)

Balak is furious now. He tells Balaam to get out of his sight and heads home. Balaam, for his sins, found that he needed to bless the Israelites again, saying, "a scepter comes forth from Israel; it smashes the brow of Moab" (Numbers 24:11-24).

All the while, the Israelites we staying at Shittim (an ancient city east of the Jordan River in Moab), some of the men decided to . . . how do we put this delicately, "enjoy" the Moabite women. Not only did they "enjoy" these women, they thought it might be interesting to worship their god named Baal-peor. I think we can remember how upset G-d became when we whined in the desert; clearly G-d wasn't going to take this in stride. G-d told Moshe that the ringleaders would have to go, and all those who had decided to worship Baal-peor were slain. It ended with 24,000 dead.