The parsha (weekly Torah portion) for the week ending June 19 is Chukat. Chukat means "decree" in Hebrew and is the ninth word (and first distinctive word) in the portion. Be sure to check out the video at the end of this article!

This parsha starts out talking about the ritual of the red heifer. It is a sacrifice that can cleanse a person who is unclean from coming into contact with a dead body. It is vital to do this because the unclean cannot remain so, and if they refuse to purify themselves, they would be cut off from the nation.

In Numbers 20:1 we read that during their wandering, Miriam dies. I feel her death is very symbolic. This is the beginning of the passing of Israelites who were slaves in the land of Egypt. Sure, we lost people before but here is a central character to our story. This generation must pass on so the next generation can enter Canaan. Though Miriam has died, it hasn't stopped the whining and complaining of the Israelites. 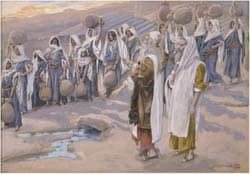 "We're hot!" "We're thirsty!" Moshe and Aaron went to G-d and begged, please give these people water! G-d says to them, "Take your staff (mateh) and order this rock to give you water." I guess Moshe wasn't listening. In last week's portion, Korach, we saw the beginnings of Moshe's ego. Here we see the repercussions of ego. Instead of following what G-d said, Moshe goes to the rock and says, "Now listen, you rebels, shall we get water out of this rock for you?" And then he hits the rock twice with his staff and water came flowing out.

There are several drashes (interpretations) here. One, from Midrash Tanchuma (Chukath 9, Num. Rabbah 19:9) tells us that Moshe and Aaron tried to speak to a rock and nothing happened. So they moved to the next rock and thought, maybe we should strike it first then speak? So Moshe hits the rock once and only a trickle comes out and then he strikes it again and the water flowed freely.

This misunderstanding leads to the final decree for Moshe and Aaron. G-d tells them that since they didn't trust G-d enough to make this miracle happen and because they didn't show the Israelites that they could have faith in G-d no matter what, they both would not enter Canaan. This finishes off their generation. It appears, from the text, that Moses and Aaron would have entered Canaan with the younger generation, however, this act seals their fate. But why now? Why this time? There were other times that Moshe didn't listen to what Hashem told him. Again, our drash states that this was the only time the Moshe publicly chose not to sanctify G-d's name in front of all of Israel. Because of this disregard, Moshe would not enter Canaan.

We leave this depressing section and move back to their travels. They are to cross Edom. Moshe asks the king of Edom if they can cross but he seems disinclined to allow it. The armies show up and the Israelites are turned away.

The wandering band of Israelites make their way to Mount Hor. It is here that G-d gives Moses and Aaron the sign that it is the end of Aaron's journey. Hashem instructs them to go up the mountain with Aaron's son Eleazar. There they transfer the high priest's garments to Eleazar and Aaron passes. Here it is mentioned that they mourn thirty days for him.

Here, again, the Israelites run into some trouble. The king of Arad challenges them to a battle. The Israelites defeat the armies from Arad. All this wandering and fighting and death brought back the complaints of the Israelites. They started to complain about G-d and Moshe, which brought about disappointment in G-d toward the people. G-d let these burning serpents loose on the people. These serpents would bite and kill the people. In their fright, they confessed their bad behavior and asked Moshe to speak to G-d about the serpents. Oddly, G-d instructs them to build a serpent on a staff. Then anyone who looks at it will be cured.

What is this? G-d condemned us for building the Golden Calf, but here G-d requires a golden serpent? One drash is that G-d was forcing us to face our fears. Fears of that nagging snake in our head, the one who made us doubt our leaders and our faith. Perhaps G-d was challenging us to be better people.