The parsha (weekly Torah portion) for the week ending June 12 is Korach. Korach means "baldness or frost" in Hebrew, is a proper noun (a name), and is the second word (and first distinctive word) in the portion. Be sure to check out the video at the end for a great perspective on the Torah portion by Rabbi Joseph Telushkin.

Leadership has many benefits but it also has its drawbacks. It isn't easy to lead a large group of people, whether a country, a synagogue, a youth group, or the entire nation of Israelites. There will always be dissenting opinions and people who feel they could be doing a better job leading. So it is with Korach and Moshe. In the beginning of this parsha, Korach, a Levite, joins with two men of the Reuven tribe and 250 other chieftains to challenge Moses' authority over the Jewish people. Their argument? All the Israelites were holy and enveloped in G-d's eyes, so how could Moses claim to be higher than them? 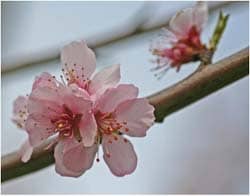 Moses and Aaron were uncomfortable with this. Hadn't they worked so hard to get the Israelites out of Egypt? Hadn't they pleaded with G-d that these were holy people and begged G-d not to destroy them every time they whined and complained? How could these people have such short memories? Here we start to see the ego in Moses that will begin his downfall and keep him from entering the land of Israel. Moses tells Korach and his people to bring their ritual fire pans and incense to the Tabernacle the next day for G-d to decide who is holy and worthy of being the people's direct link to G-d.

Originally, Korach had joined with two specific members of the Reuven tribe, Dathan and Abiram. Though they were all supposed to present themselves for this judgment, Dathan and Abiram decide not to join them. Korach, however, and many others show up. At the Tabernacle, with their incense, Moshe tells the gathered community that if the men who oppose him die a natural death then he isn't the direct connection to G-d and perhaps is not the right leader for the Israelites, as Korach was proposing.

Suddenly, the Earth opens up and swallows Korach and his followers and all their possessions. What is interesting here is that one of the meanings of Korach's name is bald or baldness. Perhaps this is because his actions left holes or bald patches within the people of Israel. Korach is one of the more evil characters in our Torah. To this day his name recalls ego and pride. His behavior in this parsha is nothing less than a study in callous treachery.

Rather than admitting to Moshe that they were wrong and he is the correct leader, the people blame him for the deaths of all of these people. Moshe and Aaron pray for the people of Israel, that G-d would not destroy the entire community. Finally, G-d strikes down the other people who brought their ketoret (incense) against Moshe with a plague, and then Aaron stops the plague with his own ketoret offering. However, 14,700 of the rebellious people died of this plague.

The crux of the issue is that repeatedly people attempt to copy Moshe externally. They see the man with the big stick, talking to G-d, and they covet that power. So rather than internally replicating Moshe's attitude and beliefs, they dress like him and walk like him and carry a walking stick like him. Many mini-Moseses milling around the desert.

G-d decides that, once again, the Israelites must learn that external imitation is not what is needed but rather internal faith and steadfastness to G-d. So, G-d tells Moshe to collect the staff (or mateh) from the chiefs of each of the twelve tribes, the staffs that they found to imitate Moses. They carved the name of the chief onto each staff to accurately identify them later. Moshe carves Aaron's name on his (Moses') staff to represent their familial tribe of Levi. They were then placed inside the Tent of Meeting, the Tabernacle, overnight. The next day, when Moshe went to retrieve the staffs, he found that Aaron's had sprouted flowers and almonds.

One drash (commentary) is that his staff had come from Gan Eden (the Garden of Eden) and directly from the Tree of Life, and was then passed down the generations to Moses and Aaron. But also, the word "almond" could mean many different things. The shoresh (or root) of the word almond in Hebrew is spelled shin koof dalet (sheked). It can also mean to braid or interweave, to be studious, intent, industrious or conscientious, to be careful, to wait for an opportunity, scrupulous. The almonds sprouting from this mateh (staff) were also the ideals and ideas of this new nation. You can't expect to be the leader of the Israelites without these qualities, the almonds of characteristics.