What Mormon Fundamentalism Shares with Pornography 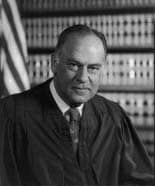 If you feel slightly misled by the title, don't be. Like Judge Potter's (pictured above) famous  bon mot about pornography, fundamentalism lacks a coherent agreed-upon definition, though you can often recognize it when you see it. The specific problem remains over what constitutes LDS fundamentalism, or even if such a thing exists. What is "fundamentalism" in a Mormon context? If you call someone a fundamentalist, is it pejorative? If the term is purely descriptive, what does it describe? Rather than attempting a definition, I'll explore how others have used the term vis-à-vis the Mormon tradition.

If an odd-humored person shouted "Mormon fundamentalism!" in a crowded theater, the puzzled occupants would most likely think of the polygamous groups who have laid claim to the term and been in the news lately, such as the polygamist Fundamentalist Church of Latter Day Saints (FLDS) or Warren Jeffs. As discussed by Brian Hales in the companion piece here on the Public Square, from an LDS perspective, groups like the FLDS violate several principles that Joseph Smith would likely have considered fundamental, and the term is therefore misplaced.

The Encyclopedia of Mormonism article "Fundamentalists," authored by J. Max Anderson, seems to accept that "fundamentalism" applies primarily to polygamous break-offs of the LDS church. "'Mormon Fundamentalism' denotes the beliefs and practices of contemporary schismatic groups that claim to follow all the teachings of the Prophet Joseph Smith. They often style themselves believers in the ‘fulness of the gospel,' which they assert must include plural marriage and sometimes the United Order [a communal way of living]."

The LDS Church, motivated equally by public relation concerns (who owns the term Mormon?), doctrinal purity, and a desire to distance itself from polygamy, has repeatedly made statements challenging the terminology of the schismatics (and by extension, their legitimacy). For example, President Gordon B. Hinckley stated in the worldwide General Conference in October 1998, "There is no such thing as a 'Mormon Fundamentalist.' It is a contradiction to use the two words together." This has been reiterated several times by the LDS Newsroom. President Hinckley seemed to accept the referent, that "fundamentalist" referred to polygamy with no other context, while stating that one could not be both a Mormon and a polygamist.

LDS sociologist Armand Mauss adopts a broader view of fundamentalism in his The Angel and the Beehive: The Mormon Struggle for Assimilation. Drawing on a scholarly literature of Protestant fundamentalism, he states, "Fundamentalism is not a specific creed but rather a certain way of thinking about religion, about deity, and about the other world . . .  The categorical label fundamentalist tends to be attached to those persons, churches, outlooks, or life-styles that seem to reflect fundamentalist tendencies enough to make them conspicuous in comparison to some ill-defined but more moderate position." Mauss then devotes an entire chapter to exploring fundamentalism so-defined within the LDS Church.

Mauss received minor criticism in one LDS review, focusing on the definition used. Mauss's "definition used for fundamentalism strays from standard LDS usage." Indeed? But where has this LDS usage been standardized and by whom? "Rather than referring to groups espousing polygamy, Mauss defines Mormon fundamentalists as those believing in scriptural inerrancy, salvation by grace, authoritarian leadership, and strict obedience to pastoral injunctions. Using this definition, he cites the use of a lay clergy, a movement toward centralized management, the turnover in the First Presidency, the reaction to a new class of intellectuals, and the disproportionate conversion of southerners as sources for this rise in fundamentalism."

Yet other Mormons in "apologetic" circles such as The Maxwell Institute (née FARMS) and FAIR seem to have adopted a definition similar to Mauss. A search of the MI website turns up many references to "fundamentalists" and the vast majority of these are talking about Protestants, Evangelicals, or similar mindsets among LDS. Among the FAIR group (where I participate on the internal email list) the term is sometimes used off-handedly, such as in the phrase "fundamentalist mind-set," which apparently means something like a rigid black-and-white worldview, belief in prophets and scripture that are practically infallible (lip service is often paid to fallibility as set forth in the scriptures or various statements by Joseph Smith, but to paraphrase, "we know they never really make any mistakes in anything important"), and a general opposition to non-LDS sources of knowledge, whether scientific or otherwise.