The Anti-Federalists, the Oil Spill, and the Catholic Church 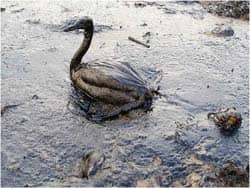 There are lessons of wisdom to be found in every folly, however painful the extraction. The ongoing, almost comic bungling efforts and non-efforts of the federal government dealing with the oil spill in the gulf is no exception. The most important political lesson is both conservative and Catholic.

The conservative lesson? When dealing with a local problem, a strong national government will invariably act for its own self-preservation, push its own national agenda, and entangle the hapless locals in its own morass of bureaucratic confusion. Insofar as possible, let the local folk do it. They're the best judges of their own particular situation.

For conservatives, this is the wisdom of the Anti-Federalists, those forgotten founders of America who best understood the dangers of increasing federal power at the expense of state and local government. The Anti-Federalists were the stubborn conservative folk who allowed for ratification of the Constitution only if there were a strong Bill of Rights to protect state and local life against encroachments of the federal government.

For Catholics, the oil spill illustrates the wisdom of the principle of subsidiarity -- a much-neglected jewel of the Church's political prudence that, especially in these dark times, needs to be taken from her treasury and displayed prominently. Here it is, taken straight from the Catechism of the Catholic Church.

Excessive intervention by the state can threaten personal freedom and initiative. The teaching of the Church has elaborated the principle ofsubsidiarity, according to which "a community of a higher order should not interfere in the internal life of a community of a lower order, depriving the latter of its functions, but rather should support it in case of need and help to co-ordinate its activity with the activities of the rest of society, always with a view to the common good." (1883)

The principle of subsidiarity is opposed to all forms of collectivism. It sets limits for state intervention. It aims at harmonizing the relationships between individuals and societies. (1885)

The conservative principle dovetails well with the Catholic principle. The Anti-Federalists warned of the danger of a burgeoning federal government to state and local community. The principle of subsidiarity focuses on protecting the proper and natural functions of local communities from baneful control and manipulation by more comprehensive -- especially collectivist -- power. Both hold that human social, political, and economic life are best and most solidly built from the local ground up, and that national governments should supplement and support local efforts, rather than supplant them. Both assume that families are the fundamental moral, social, and economic unit, and that individuals in families -- both as a right and duty -- must be free to exercise their own moral, social, and economic responsibilities as they judge best, according to their own particular circumstances and needs. And finally, both realize that, given the reality of sin and the limitations of mere human nature, centralized political power will be far more likely to serve its own agenda at the expense of the actual needs of local communities.

To better understand the wisdom of the Anti-Federalists and the Catholic principle of subsidiarity, we need only recall some of the details of the ongoing folly of the federal government in the Gulf of Mexico. The underwater oil rig blew on April 20, 2010. British Petroleum rushed in to assure that its stock price received as little damage as possible and that containment and cleanup costs would be kept to a minimum. The Obama administration gathered together immediately, and just as promptly did nothing, leaving it to BP to fix things, despite the pleas of Louisiana governor, Bobby Jindal, for help.

Happily, all help offered from various quarters around the globe (most conspicuously by the Dutch) was judiciously rebuffed by the federal government. On what grounds, it has never been made clear, although the Obama administration later solemnly invoked a dusty treaty and complained that Dutch efforts wouldn't meet our environmental codes, spilling too much oil back into the water. (So, it's apparently better to simply let 100 percent of the oil spread out than capture, say, 80 percent.)

When the slumbering federal government was finally goaded into action by public opinion, it sent down the U.S. Coast Guard to stop local clean-up efforts to ensure that the barges were complying with federal regulations about life vests and fire extinguishers. Then the U.S. Fish and Wildlife Department halted the creation of protective sand berms being hurriedly built to keep the oil from hitting the shores. They want to make sure sensitive areas of shoreline are protected from dredging. But isn't the actual oil a bit more of a problem?