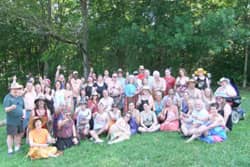 I recently got back from Pagan Spirit Gathering at Camp Zoe in Salem, Missouri, and it was a fascinating look at consensus reality in action.

Practicing consensus reality is simple. It starts with an idea, or a set of ideas, that people believe and promote as reality. How does this relate to PSG? It occurred to me that the entire festival is a powerful exercise in consensus reality. For years PSG has had a set of ideals, values, and goals that participants accept as the reality of PSG, which then becomes the reality of the festival.

This fascinates me. It takes the concept of sacred space farther than I have ever seen before. While we suspend the ordinary way of things for a few hours during ritual on a regular basis, suspending the patterns and behaviors of the everyday for over a week is not an easy task. Yet this happens at PSG.

For instance, nudity is frowned upon by our society. The body, despite modern attitudes, is still seen as something generally shameful by society. Despite our participation in Pagan culture, we are still shaped by the society around us, so that even if we see nothing wrong with nudity we are acutely aware that others do. However, once you enter PSG, nudity is accepted by the consensus reality and becomes a non-issue.

There's a huge shift in perception walking through the gate. We move from fifty-one weeks during which it's not merely unheard of to see nude people strolling about but it's considered unnatural and immoral, and then we walk through a gate where it is considered so natural as to be uninteresting. Such shifts in perception usually only happen in dreams or stories involving faerie lands.

There are other things that change. People dress differently. Military people don sarongs. There's an explosion of tie-dye. People act differently. Folks who would generally be reserved about sharing their beliefs and lifestyle are very open and matter-of-fact. People who may not allow their kids to talk to their neighbors back home let their kids explore the festival with other kids and chat up the folks camped around them. What makes this possible is the consensus reality of PSG, which is built on two basic principles: harmony and safety.

Ordinary festivals think of safety in the physical sense. Pagan Spirit Gathering raised that a couple of notches and included privacy in their safety concerns. Las Vegas has a popular ad campaign stating that "What Happens In Vegas Stays In Vegas," implying that things naughty, reproachable, and possibly unethical happen there and that's okay. PSG takes a different approach. What happens at PSG stays within the PSG community; you are free to be who you are without concern because in this community you are protected. You will not be outed in anyway to society at large. I spoke to people who cannot be publicly Pagan for professional reasons, yet at PSG they are walking around sporting pentacles, Celtic knotwork sarongs, chanting songs to the old Gods, and dancing around bonfires without a worry.

Everyone who passes through the festival gate accepts this safety and harmony as PSG reality, and therefore it becomes a real part of the experience. Everyone behaves in accordance with the principles of the festival's consensus reality, and those who don't can be asked to leave by the Guardians.

There were moments during Pagan Spirit Gathering that I took a deep breath and thought about the fragility of this shared reality. It seemed as if we all felt that one person stepping out of bounds and behaving inappropriately could shatter the beautiful community we had created. It felt as if everyone was consciously maintaining the shared reality, making sure each interaction strengthened the community.

The fact that this consensus reality was built and maintained for eight days by over 900 people was quite impressive. Some groups have difficulty creating sacred, intentional space for the space of a few hours with a dozen people. I wonder if the sheer numbers and length of the festival aided in the endurance of this community spirit? Is that the secret? Or has a PSG egregore formed, that holds the sacred boundaries and strengthens year after year?

Often magic can simply be the process of changing your own perception, and then your perception informs the reality of your life. Changing the world can be this simple -- people agreeing to a sacred reality and then actively creating that community in their daily lives. I think this is the challenge of PSG, to bring that community spirit home and integrate it into our mundane lives.

Who knows? If we keep the practice up and pass it on, then we may be planting the seeds of peace, joy, and freedom for future generations.