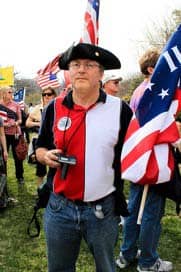 The newspapers, TV, and religious talk shows are dominated of late by battles between liberals and conservatives. The Tea Party is a lightning rod that raises these disagreements to a fever pitch. Most of us know the hostile words that mainline Protestants are inclined to say about the Tea Party movement. (To be honest, I've also experienced this temptation.)

In the end, Tim and I disagree. Still, it's not like he doesn't have reasons for his views, as I have reasons for mine. Merely adding more incendiary remarks to the fire isn't particularly helpful. So let's do something different. What happens if I step back from the details and think more about the general thrust of these three blogs (and about the statements on record from leading figures in Tea Party)? What general features do you see when you read them through altogether? Here's what I see:

First, one notices that the tone is pretty defensive. Tim (and the scores of people who responded on the Patheos site) feel under attack. Tim bemoans how the movement has been "misrepresented and mocked." He makes a good case that some of these criticisms have been unfair. The cost of the defensive blogs, however, is that the series is a bit thin on concrete proposals and theological grounding.

Second, the protests notwithstanding, the primary stress is still on the Tea Partyers. They say they are tired of seeing taxes go up, fed up with the government wasting too much of our money. It may well be that some conservatives genuinely "believe that their policy preferences are for the betterment of all society and not only for themselves." But I cannot agree that it is "concern for the common good that animates the Tea Party movement." I just don't see it.

Tim wants to be calm, rational, and measured. Still, he finds liberals irritating. He attacks back. At times he tends to stereotype the same liberals whom he's accusing of stereotyping the Tea Partyers. This is a widespread feature of American political debate today, on both sides. Even those of us who resist it remain guilty of it.

The answers coming out of the movement tend to be private answers. Tim would prefer that "Jobless Joe" receive the funds he needs "from the members of the church down the street." But many of those with the most severe needs are just not going to make it through the doors of Tea Partyers' churches. Oppression, poverty, racism, lack of access to educational opportunities -- these are systemic problems that require systemic intervention.

And that brings me to the bottom line. Many of us who disagree with the Tea Partyers don't do so because of ad hominem arguments. We can even say, with Tim, that some people in this movement are motivated "by sincere concern for the good of their country." But we do disagree with their political philosophy. We believe the policies of conservative Republicans benefit business and middle-class Americans more than our country's weakest and most vulnerable. We think that the New Testament and the history of the Christian tradition point in a very different direction . . . require a very different set of priorities for Christians . . . encourage us to support very different social and political policies on matters of race, immigration, health care, and the environment.

Daniel Schultz discusses the origins of the word "progressive" in an American political movement from the early 20th century: