"Gymnastics Was the Gift God Gave Me"

An Interview with Carly Patterson
By Timothy Dalrymple 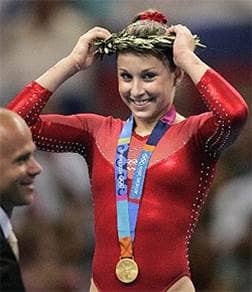 Carly Patterson was a rising star in 2002 when she won the Junior National All Around title, and she was the youngest competitor (having just turned fifteen) in 2003 when she won the American Cup, her first senior event. After suffering a broken elbow, she battled back and won the silver medal in the All Around at the World Championships the following year.

At the 2004 Olympic Games, Carly was the first American woman to win the All-Around gold medal since Mary Lou Retton. Since the Olympic All-Around title instantly confers legendary status upon a gymnast, Carly could have traded comfortably upon her early success within the gymnastics world. Instead, she sought out other challenges. When her gymnastics career was finished, she pursued a singing career, partly through a celebrity singing competition produced by Simon Cowell of American Idol. Her debut album, Back to the Beginning, was released in August of 2009.

Visit her webpage to learn more about Carly, or to purchase her music. She also published a book for young people and young athletes shortly after her Olympic triumph.

What can you tell us about your faith background? Was there some time in your life when you came to understand your gymnastics career as related to your faith?

I grew up in church from a young age. I always knew who God was. I believe that he has a purpose for everyone's life, and he gives everyone their own special gifts and talents.

I definitely always believed that gymnastics was the gift God gave me.

Did your faith shape your life as a gymnast?

Faith definitely shaped me and my gymnastics career. I prayed before I competed on every event at every competition. I always thanked God afterward. With gymnastics being such a difficult sport, my faith really helped me during my injuries and losses. I realized there was a reason for everything. It helped make me stronger and work harder through the difficult times. My faith made me humble, especially during my successes.

My teammates and I had a great relationship and respect for each other, so we were always happy and supportive of one another, no matter what the outcome. I truly believe faith formed the foundation of my gymnastics team and even the ongoing relationship we have today.

Did your life as a gymnast shape your faith?

My life as a gymnast has helped shape my faith. It has helped me to understand the example and mentorship I set for others and how important this is. Gymnastics made my faith stronger, because I knew there was always a reason for the wins or losses. My favorite Bible quote has always been "I can do all things through Christ who strengthens me" (Philippians 4:13).

How do you think gymnastics, more generally, shapes a person's character? What are the blessings? And what are the temptations?

Gymnastics taught me a lot about life. It taught me so many lessons I use in my life today, lessons I will use forever. It made me a stronger person, a person who believed in herself. I learned sacrifice, discipline, commitment, and so many great things that help in any part of life. It made me realize that nothing comes easy, and you have to work hard for things you want to accomplish.

Other gymnasts we have interviewed (Dominique Moceanu and Sally Ward, for example) report struggling with their attitudes toward their bodies -- wrestling with food or body-image issues, and finding it difficult to embrace or even accept how their bodies change after their careers are finished. Did you experience any of this? Do you have any encouragement for young gymnasts who may be unhappy with their bodies?

I definitely experienced body image issues after my gymnastics career was over. I was fine that I was growing and developing, but others criticized that I was fat. My feelings were hurt. But I knew in my heart and head that I would not remain a ninety-pound, four-foot-nine-inch person forever. I was truly okay with that. Every gymnast who trains at a high level will go through body changes after she stops training at that level. There is nothing you can do about it, but continue to eat healthy and exercise in other ways. I was doing all those things.