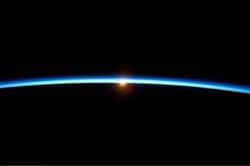 I've been keeping loose tabs on the oil spill in the Gulf of Mexico. I've caught my breath at the sight of slime-slick birds, of oil tainting our shores, and at the stories of the men and women who make their living from the bounty of the sea. I've cheered at the successes, mourned the failures, and tried to keep hopeful as the crisis lingers on, seemingly endlessly. At Pagan Spirit Gathering, I participated in the healing rituals for the Gulf earnestly and with fervor.

Yet, it seems distant, as news often does. I hear of war oversees and notice the Japanese cherry in the yard is blooming. I read about Witchhunts in Africa and India and then have a cheerful chat with Evangelical friends. Today, though, I read a story that changed how I view the tragedy in the Gulf of Mexico.

Terrence Aym published a troubling story on Helium.com suggesting that this may be one hole humans may not be able to dig their way out of. Thankfully, his theory has been debunked by Earth scientists, but it still gave me quite a scare.

Imagine the Earth as we know it simply ending. No trees. No bugs. No humans. No living, breathing things. Just a scorched, scarred rock left. Not in some far off future, but next week, next month, next year. It's an astounding image of the future.

Most Pagans believe in some form of reincarnation, and though there are infinite possibilities in the Universe, we tend to imagine we will return to this Earth in some form that will enjoy its beauty and wonder. We are Children of the Earth in a very real way. This planet supports us in every imaginable way, and if all life derived from the same cell, then we are quite literally connected to all living things on this planet.

From the moment I read the first article, and even after I found that the Doomsday scenario was highly unlikely, I was shattered. I'd been through crises of a much smaller scale -- open heart surgery, the scurry to find relatives and listen for planes on 9/11, tornadoes, and my father's death -- yet I'd never considered a planet-wide catastrophe as a possibility. Even global warming can be fixed if we all pull together, right?

The idea that I could die, and not be able to return to Earth made me cry. I'm not the weepy sort in general. Maybe a drop or two during a sad film, but I generally keep a stiff upper lip. Oh, but the idea that the fresh greenness of the earth, the beauty of humanity, the wildness of the forest, the untamed seas, and the surety of the mountain could be gone forever, crushed my spirit and made me think hard on my life.

I know I will return after death, for the Universe wastes nothing, but I had to consider that this may be my last opportunity to enjoy this Earth, this humanity, this type of existence. Perhaps I will never see a moon like this again, or see a sunset so red and ruddy. Perhaps I will never see, speak, feel, or hear as I do now, ever again. This may be the only lifetime I know the warmth, passion, and tenderness of a human lover. The only time I admire an oak, massive, towering, and wisely green. The only time I know the wondrous mystery of a crackling fire, wood smoke wreathing my head with visions mythic and pregnant with portent. The only time I know such smiles and laughter, the sleek, sly comfort of a cat, the eager, open love of a dog or the mischievous playfulness of small children.

At Pantheacon there was a panel on whether or not we were Earth-based, which T. Thorn Coyle has a recording of on her podcast. Most Pagans have adopted the term "nature-based": with our typical inclusivity we embrace a future in which we may roam amongst the stars. I embraced that term until today.

I cannot imagine any future without an Earth in it. It frightens me. Though after my death, this collection of energy and matter I call myself may dissipate and rejoin the web of life in some new fashion, multiverses away, I cannot see that future. It is beyond my imaginative capabilities.

I have slept with my heart pressed to the Earth, my breast pressed to hers. I know her in every season, better than any lover, any sister, mother, father, or brother. She has washed me with her rain, fed me with the rich bounty of her fields, forests, and seas. I cannot stand unless I stand on her. I do not sleep, unless I sleep under her skies. Her winds have kissed my face more often than have lustful men or adoring relatives. She sustains me, both spiritually and literally. She is my life.