The Reality of Pope Benedict

"I have known this man for a very long time, and what I am seeing, frankly, is the man I have always known." ~ George Weigel to the New York Times, on Pope Benedict XVI 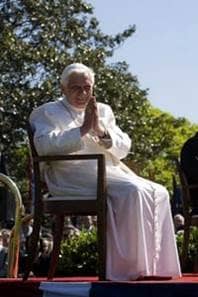 In 2005, while awaiting the peal of bells and the white smoke signifying the election of the successor to Pope John Paul II, chattering gasbags of the pundit class killed time by analyzing the strengths and weaknesses of the "papabile frontrunners." The news media and their analysts seemed to agree on one point: the election of Joseph Ratzinger -- who as prefect of the Congregation for the Doctrine of the Faith had been characterized for years in the press as the "ruthless enforcer" of Catholic orthodoxy -- would be a catastrophe. Ratzinger's "ruthlessness" consisted mostly of discouraging the "liberation theology" that too-often runs hand-in-hand with socialist enterprises, and insisting that Catholic theologians -- particularly those teaching at Vatican-sponsored Catholic colleges and universities -- either present the faith as something more than a relativistic intellectual playground, or (as in the case of Hans Küng) give up the title of "professor." Or teach somewhere else.

To some it might seem reasonable that a man of the church would expect those teaching it to do so with a measure of fidelity.

For the chatty media, however, the idea of "God's Rottweiler" as pope meant the continuation of the seemingly objectionable notion (insisted upon by his stubborn predecessor) that a pope might uphold actual Church teachings on abortion, euthanasia, divorce, etc. Presumably none of the cardinals entering the papal conclave would have -- upon ascending the Chair of Peter -- simply declared that "everything we taught before is canceled" and signed on with the progressives, but for sure, Ratzinger would not be the man to do it.

What was needed and desired, the talking heads informed us in ceaseless litany, was a pope who would "bring the church into the 21st century" and reconcile it to abortion, divorce, gay marriage, women priests, celibacy, and condoms. The press seemed willing to pretend that Joseph Ratzinger was the sole stumbling block to progressive ambitions. Then, preaching to his fellow cardinals just before the conclave, Ratzinger further annoyed many of the chatterers by warning against "building a dictatorship of relativism that does not recognize anything as definitive and whose ultimate goal consists solely of one's own ego and desires."

Not much liking that, Notre Dame's Fr. Richard McBrien sniffed: "If Cardinal Ratzinger were really campaigning for pope, he would have given a far more conciliatory homily. . . . He's too much of a polarizing figure."

In fact, Benedict is less "polarizing" than simply consistent in his faith and his philosophy; having experienced a life with which few of his critics could ever identify, he dares to stand for more than "whatever . . . ":

Günter Grass, in his memoirs, recalls an encounter with the young Joseph Ratzinger while both were held in an American prisoner-of-war camp in 1945. The young Grass, a Nazi who had been proud to serve in the Waffen-SS, was taken aback by this soft-spoken, gentle young Catholic. Unlike God, the future pope played dice, quoting St. Augustine in the original while he did so; he even dreamt in Latin. His only desire was to return to the seminary from which he had been drafted. "I said, there are many truths," wrote Grass. "He said, there is only one." (Daniel Johnson, New York Sun, September 18, 2006)

When the bells pealed for Ratzinger, there did commence some howling and not a little drama-queening. As Archbishop Chaput of Denver noted, Benedict was given no honeymoon. Live-blogging coverage at National Review, Kathryn Jean Lopez wrote: "Moments into his papacy, a seemingly annoyed Cokie Roberts calls him an ‘extremely controversial' pope." Writer Andrew Sullivan said, "The culture wars in America are already aflame, his elevation as Benedict XVI amounts to a barrel-full of petrol on the fire." E.J. Dionne described himself as "petrified" of what a Pope Ratzinger might bring. Sr. Joan Chittister suggested that Benedict was so retrograde he represented the theology of the 13th century, and predicted, "[if women are not allowed ordination] . . . we're going to lose an entire generation of young women and we're going to lose them quickly." Tina Brown got insulting: "Oh no! Cardinal Ratzinger!" wrote Brown, "His very name was ominous," while Maureen Dowd went into a predictable meltdown: "The white smoke yesterday signaled that the Vatican thinks what it needs to bring it into modernity is the oldest pope since the 18th century . . .  a 78-year-old hidebound archconservative who ran the office that used to be called the Inquisition and who once belonged to Hitler Youth."