St. Dymphna: Out of the Shadows of Mental Illness 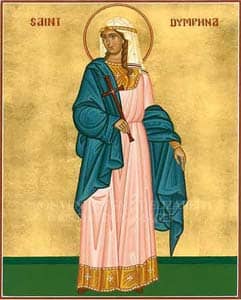 Mark had his first nervous breakdown when he was 16. Another followed two years later, during his freshman year in college. The diagnosis was bipolar disorder, type 2. The treatment was therapy and medication.

In time, he found a way to manage his illness. He started a family and returned to the faith he had abandoned, finding new peace and unexpected strength in the Church. "We went through a really bad period," he says, "losing a lot of loved ones and having all kinds of health problems. Normally, those would have triggered a downward spiral into depression, but they didn't. Prayer, faith, the Church, the Eucharist: all those things kind of gave me a floor that I could stand on."

That floor seemed to drop away with the gradual recognition of his own son's mental illness, which began to manifest itself when the boy was only 7. Mark's first reaction was "Guilt. Terrible guilt. I really believe some families pass on mental illness, or at least a tendency to it, in their genes. No question. My own family tree has examples as far back as we can trace, and I knew I'd passed it on to my own son. It was a horrible feeling."

By this time, however, Mark was deep into readings about the saints, where he discovered St. Dymphna.

The Saint in the Shadows

The problem for anyone with a devotion to St. Dymphna is that her story may be mere legend, embellished in the shadows of the Middle Ages. In the tale, Dymphna is the beautiful young daughter of an Irish pagan king and a pious Christian woman. Raised as a Christian, she is tutored and ultimately baptized by a priest named Gerebran. Noted for her faith and piety, she consecrates her virginity to Christ and takes a vow of chastity.

When Dymphna's mother dies, the king is driven mad with grief, and sends his councilors to scour the land for a replacement wife of equal beauty and grace. Failing this, the councilors point out the resemblance of Dymphna to her mother, and suggest the king take his daughter as his new wife. Repelled by the suggestion, Dymphna asks for forty days to consider her choice, and then promptly flees the country with Fr. Gerebran, the court jester, and his wife.

This odd band of wanderers finally land in Gheel, Belgium, where they decide to settle and build a church. The king soon tracks them down, and when Dymphna rejects his advances, he decapitates both her and Fr. Gerebran. The villagers lay the pair in a cave, and when they return later to give them a proper burial, find a pair of tombs already carved from pure white stone. A red tile lies on Dymphna's breast, bearing the words "Here lies the holy virgin and martyr, Dymphna."

Although these events are traditionally dated between 620 and 640 A.D., the story itself remained an oral tradition until written down in the 13th century. Even the Catholic Encyclopedia says, "This narrative is without any historical foundation, being merely a variation of the story of the king who wanted to marry his own daughter, a motif which appears frequently in popular legends."

Her life, however, is less interesting than her afterlife. After her shrine was built, Gheel soon became the site of many miraculous cures of the mentally disturbed. The town gradually became a major pilgrimage site for the mentally ill, leading the Sisters of St. Augustine to create the Infirmary of St. Elizabeth to tend to their needs. Indeed, the people of Gheel became renowned for their gentle care of the mentally ill, often taking them into their own homes. Seven hundred years ago, this process of moving patients from a hospital to a private home and then back into their own communities was a revolutionary way of treating mental illness that wouldn't gain widespread acceptance until the 20th century.

For those who call upon the intercession of St. Dymphna, patron saint of those with nervous disorders, the miracles are all the proof they need.

St. Dymphna's story can be an obstacle for anyone seeking her intercession. She left behind no writings or sayings, did not suffer from mental illness herself, and wasn't known for her work with the mentally ill.

As Mark observes, "There wasn't really any entry point to a devotion. With Venerable Matt Talbot, he was alcoholic. He understood that suffering; an alcoholic looking to him for prayerful companionship could relate. She was more like a character out of Grimms' [Fairy Tales]."

But Mark printed a novena to St. Dymphna from the internet, and started integrating her into his prayer life. It was at that point that his devotion began to grow. In the process of prayer itself, he began to forge a relationship with a saint whom he had initially found inaccessible.