The Significance of CLS v. Martinez 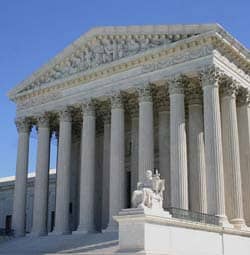 The significance of Supreme Court cases is better seen in retrospect, when the dust has settled, the spin has spun out, and a transparent view of of the consequences becomes possible. We will not clearly perceive the import of Christian Legal Society v. Martinez until the years have given us perspective, not only on the ruling itself but on the manifold ways in which universities -- and potentially other state institutions -- have applied it within their spheres of influence. Yet it is worth examining the logic of the decision and its possible consequences. I do so now not as a lawyer, but as a religious philosopher and interested observer who followed the case closely and interviewed experts on both sides of the issue. I will refer to those interviews throughout.

The background is this. The parties in conflict are the Christian Legal Society (CLS), a national fellowship of Christian law students and lawyers, and the Hastings School of the Law in San Francisco. Hastings is associated with the University of California system, and is therefore an organ of the state, supported by taxpayer funding.

Prior to 2002, there was an unaffiliated group that called itself the Christian Legal Society, which required adherence to a statement of faith, and which was regularly recognized at Hastings as an official student organization. From 2002 to 2004, a "Hastings Christian Fellowship" was also recognized by Hastings, but was less orthodox in its creed and conduct. When new leaders took the helm of the student group in 2004, they sought to restore the group's orthodoxy and also affilitate it with the national Christian Legal Society. This meant applying the CLS national model bylaws, which require voting members -- those with the power to shape the identity and the future of the organization -- to affirm a simple statement of orthodox Christian faith.

To many, a statement of faith requirement would seem unobjectionable. Numerous religious groups are defined not by ethnicity or nationality or class, but by creeds of belief and conduct. In order to maintain an enduring and cohesive identity, and in order to profess its most essential beliefs and gather others of like mind and heart, a Christian group must be able to establish and require adherence amongst its voting members to a statement of faith. It would seem that neither the state nor an organ of the state should possess the power to tell the church that requiring certain beliefs will disqualify the church from equal participation in the marketplace of ideas.

Hastings School of the Law -- and five Supreme Court Justices -- disagreed. For the first time, Hastings rejected the Christian Legal Society's application for Registered Student Organization (RSO) status, along with the access to funds and facilities such status brings, on the grounds that requiring members to affirm a statement of belief is discriminatory. Initially, this was said to violate a written non-discrimination policy, which prohibited discrimination on the basis of religion or sexual orientation. The fact of requiring adherence to a statement of faith "discriminates" against non-Christians, and the statement's views on sexuality and marriage "discriminate," according to Hastings, on the basis of sexual orientation.

This is where the case gets messy. After litigation began, Hastings claimed that the policy CLS transgressed was actually not the written non-discrimination policy but an unwritten "accept-all-comers" policy, according to which all RSO's must permit all students to become members and even leaders. Dean Leo Martinez explained that, yes, white supremacists must be permitted to become members of black students groups, and anti-semites must be permitted to become members of Jewish student groups, and the like. This, he claimed, is a reasonable condition for participation in the forum of RSO's, since it would serve to foster an exchange of ideas and growth in mutual understanding.

The advantage of the all-comers policy, and the strategic significance of the move, is that it is ostensibly "viewpoint-neutral." Thus Hastings is not objecting specifically to the orthodox Christian viewpoint, but to the simple fact that CLS does not allow all students to become members.

I think it is accurate to say that this is a façade. Hastings had never before objected to student groups, and still has never objected to other student groups, that fail the "accept-all-comers" test. Michael McConnell, in an interview we conducted in early May, referred to this as a "late and for-litigation-only concoction." When CLS objected that the non-discrimination policy is not viewpoint-neutral, since it permits exclusion on the basis of political ideology (for instance) but not religious belief, they were told that the all-comers policy was the real concern. Yet when CLS pointed out that other student organizations violated the all-comers policy, they were told that only CLS had violated the specific non-discrimination categories in the written policy. This became a sort of shell game. As McConnell says, "It has never been about an all-comers policy.  It has always been about discrimination on the basis of religion or orientation."