Can Muslims and Christians Live Together in Peace?

By Robert A. Hunt

This is Part One of a two-part series on Christian/Muslim relations, read Part Two here. 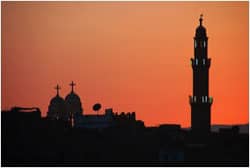 One of the great changes in Western thought during the Enlightenment was the rise of the social sciences, and with them scientific explanations of human behavior on all levels. Religion itself could be thus explained with no recourse to supernatural revelation. It is not that such things didn't grip the human mind, rather, they were understood to be manifestations of deeper social and psychological needs. As a motivation for violence, or for peace, they were mere symptoms of more fundamental human conflicts. Resolve these and religious peace would surely follow.

At least at a popular level, this enlightenment confidence in the powers of the rational economic, social, psychological, and political sciences to explain conflict has all but disappeared. In current American popular discourse we find the continued assertion that in fact being Muslim, or Christian, trumps all other considerations in how people live with their neighbors.

In the course of teaching about inter-religious dialogue and Islam in Dallas, Texas I meet dozens of Christians a month who assert that Muslims who live comfortable, upper middle class lives in our northern suburbs would gladly give up their lifestyles and professions in order to turn the United States into something like Afghanistan under the Taliban. Many more whom I've never met make essentially the same assertion with their protests, placards, and letters to the editor concerning the building of new mosques. In their view, Islam as a religion is a stronger motivator than economic advantage, social stability, and personal freedom. They are not alone. They have their Muslim counterparts in Muslim countries who insist that powerless Christian minorities are plotting, against their personal safety and economic self-interest, to somehow convert everyone to Christianity and overthrow Islam.

To a mere observer of reality, these claims about the ability of a religion to be a major motivation for violence toward others appear to be abject lunacy. Those motivated by religion of any sort are a miniscule fraction of the more than 16,000 murders a year in the United States. Despite "if it bleeds it leads" headlines, this is true in the world as a whole as well. India has had about as much religious violence reported as any country in the world, but it pales next to the violence in the society as a whole. Harassment, likewise widely reported, is likewise far from actually being common.

So the first answer to the question "Can Muslims and Christians ever live together in peace?" is that we already do, and almost always have. This isn't to say that we shouldn't seek to eliminate religious violence, only to realistically note that if we wanted to lower the level of violence in the United States and the world, the place to start would be the problems caused by poverty, drugs, and misogyny. These and not religion are the real killers in our world.

Yet it is simplistic to blame the media for misrepresenting the history of relations between Christians and Muslims when neither group is willing to engage the reality outside the media's fantasy world. Both Christian and Muslim interest groups are prone to circulate frightening headlines about religious violence, then feel the pulse of their constituencies and, not surprisingly, find growing fear of violence. A story that sells, whether on television, the radio, or in print, demands not facts but a narrative, and the narrative that draws viewers, readers, voters, and donors right now is the narrative of religious violence and the fear it invokes. It sells, and so it will be sold.

The only antidote to this narrative is exposure of Christians and Muslims to one another's reality. In the last decade, Muslims appear to be making the greatest effort in this direction. At least in the Dallas/Fort Worth area, they are going out of their way to invite Christians to visit their mosques, attend fast-breaking dinners, and engage in inter-religious dialogue. Yet Muslims also need to change their understanding of the Christian religious reality. So it would be helpful if Christians reciprocated and invited Muslims into their church homes not for evangelism, but simply to see and understand the Christian reality.

Beyond this there is dialogue, in particular the kind of dialogue that brings small groups of Christians and Muslims together over at least several weeks to learn about each other. This dialogue has an impact independent of media coverage of dialogue "events" and grown through continuing friendships. At Perkins School of Theology we have sponsored such intimate dialogue groups over the last six years, and several hundred Christians and non-Christians have come to know each other, befriend each other, and begin to work together. This kind of inter-personal dialogue is the best way to overcome the distortions of reality perpetrated by the mainstream media around the world.