The Future of (Secular) Humanism (or "So Bright, I Gotta Wear Shades")

Never in the history of America has the future been brighter for the nonreligious population.

As of right now, nonreligious people (atheists of all forms: hardliners, agnostics, Secular Humanists, etc.) make up about 15 percent of the population, numbering nearly 50 million people (not including "church pew atheists," who call themselves something else but are atheistic nonetheless). For reference, that's more than Jews, Muslims, Hindus, and Buddhists, combined and doubled. Among 18-30 year olds, that percentage climbs to 25 percent. Atheism is the fastest growing theological belief in all fifty states.

Some have speculated that this growth is a fad, and that this trend will reverse. They are wrong. The trend will continue -- it has no choice.

There are three factors that will guarantee further growth of the nonreligious population:

1) The continued social grief from religionists -- Whether it's bombings, censorship, book burnings, simple hate-speak, or rape trials, religion is burying itself. One cannot open a newspaper or web page without news of another atrocity from another religious leader, or another church or mosque that is advocating hatred or violence. Religion's involvement in the gay marriage issue, abortion, and other social issues continues to erode its credibility as a moral leader in modern times, and the hypocrisy of the Religious Right in American politics is so blatant that even the truest believer can't believe.

On the other hand, atheism makes sense. There is no "well, you just have to have faith" or "Trust me, I speak for God." Indeed, the lack of knowledge is acknowledged as a good thing -- a place for growth and learning, not fake answers and avoidance. Also, you will never hear of atheist organizations hiding a pedophile or murderer, because unlike religion, we place no rule above the law of the land.

2) The shrinking world -- Despite the growth of atheism, America is still one of the most religious nations on earth. Europe and Asia are far less religious, and they are proud of it, bordering on conceit. As information is exchanged and diversity within America increases, so will this religion-free influence. For example, simply mentioning religion to a British citizen will often yield an education of how silly religion is considered by the British, though England is the birthplace of the KJV Bible and the Anglican Church. France and Germany are just as secular, Italy has a thriving atheist political party, and the Prime Minister of Australia is an out Atheist -- and nobody cares. Many other civilized countries are laughing at our piety, and we are beginning to hear it.

3) The internet itself -- When I was growing up, I was, for a while, the only atheist I'd ever met. I had to go to the library to find a book on atheism, and there was only one to be found. Truly, I was alone, as was every other atheist in the country, or so it seemed. Loneliness led to fear, which led to silence. Silence among atheists led to the flourishing of bigotry (yes, that's the word) against them by most religious leaders and, as a result, their flocks. Since atheists were silent and invisible, we were easy to label as evil, unhappy, and of course immoral (because morality comes from God), so any closeted atheist not only felt alone, but also ashamed. This vitriol resulted in atheists becoming the single most hated group in the country.

This has all begin to change, thanks to the internet. Now, anyone can find a wealth of information on religion and atheism, and more importantly, a wealth of friends. MySpace, Facebook, and YouTube are filled with young atheists just itching to share their beliefs and make new friends. As a result, it is impossible for atheists with internet access to feel as alone as I did. Company leads to strength, and strength leads to openness and honesty. Atheists will never be alone again, and so they will never be silent again.

We have not seen the end of the growth of atheism. The factors I mentioned above will not go away, and as a result, the secularist tide will continue to swell. This is just the beginning.

Today's teachers need to be aware of the substantial growth of the atheistic population, particularly among young people. At this point, it's safe to assume that there are atheists in every school, every classroom, and every family. 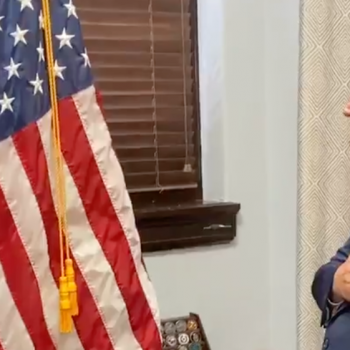 What Exactly is Ted Cruz Trying to Do in This Bizarre Flag Video?
Hemant Mehta
4

Jimmy Akin's Mysterious 50's Part 2
Mark Wilson
Get Patheos Newsletters
Get the latest from Patheos by signing up for our newsletters. Try our 3 most popular, or select from our huge collection of unique and thought-provoking newsletters.
From time to time you will also receive Special Offers from our partners that help us make this content free for you. You can opt out of these offers at any time.
see our full list of newsletters
Editor's picks See all columnists