It's hard to believe that we're almost a decade into the new millennium. Ten years ago, churches were busy preparing for Y2K, communicating with a hot new tool known as "Instant Messaging," and talking more and more about postmodernism. Evangelicals and their churches that have been successful in the ten years since have been able to anticipate and recognize trends quickly, and subsequently find effective ways to communicate the gospel in a meaningful manner to the culture in which they live. For that to continue in the next decade, several issues will need to be discussed and resolved.

First, evangelicals must learn to navigate what I call a "post-seeker context." When I use this term, I do not mean that seekers no longer exist. Rather, churches that once targeted seekers from the Boomer generation are finding that large portions of subsequent generations do not have the same religious memory. "Seeker churches" thrived when they could create new expressions of church that related to a population with at least some Christian memory.

I believe that all seeking is in response to the work of the Holy Spirit. In practical means, then, I believe the Spirit often uses the religious memory latent within a culture to pique the interest of the unchurched. For evangelicals to reach seekers in the decade ahead, they will need to develop new models and other means of communication to deliver our message into the cultural destination of an increasingly post-seeker context. When religious memory is gone, we can no longer rely on those outside of the faith to be interested in what it means to be inside of the faith.

Secondly, evangelicals need to regain a confidence in the gospel. Why? It appears to me that evangelicals are considering what it is, how it should be lived, and how it is best proclaimed. Even Christianity Today entered the fray by doing a series entitled, "Is Our Gospel Too Small?" Their articles addressed the question of how we might best consider the gospel.

I find it interesting that two of the most newsworthy movements in the church from this first decade of the millennium were the emerging church movement and the new Reformed movement. While they had plenty of differences between them, one thing they shared in common was this: they were both seeking a better gospel. The emerging church wanted a broader gospel (more holistic) while the new Reformed movement wanted a bloodier gospel (more cross-centered). The successful post-2010 church will have worked through the confusion and set a stake in the ground for a more robust, biblically discerning gospel.

Thirdly, in the next decade, we will need to address the definition of evangelicalism. Right now, people often define evangelicals as anyone from Joel Osteen to Brian McLaren to John MacArthur. That's a pretty broad spectrum. The church must navigate through the evangelical malaise and work through the confusion of what they believe. There is work underway currently to make this happen. Movements like The Gospel Coalition, An Evangelical Manifesto, and This We Believe are all attempting to offer definitions of what an evangelical church is so that this identity can be lived out faithfully. But care needs to be taken. To paraphrase a friend, if the term evangelicalism is applied to everything, then it will mean nothing.

Fourth, evangelicals must address our shallow definition of discipleship. LifeWay Research published a book called The Shape of Faith to Come by Brad Waggoner. Based on a study of 2,500 regular Protestant church-goers, we found the statistics revealing. Only 16 percent of participants said that they read their Bible daily, and another 20 percent said they read the Bible a few times a week. Only 23 percent agreed strongly with the statement, "When I come to realize that an aspect of my life is not right in God's eyes, I make necessary changes." In the past six months, only 29 percent said that they had shared with someone how to become a Christian twice or more, and 57 percent said they had not done so at all. 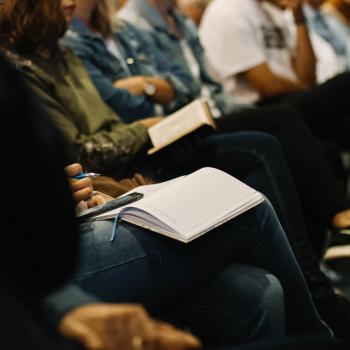 Renovation Roll Out: A Letter to West Franklin
Matt Pearson
4 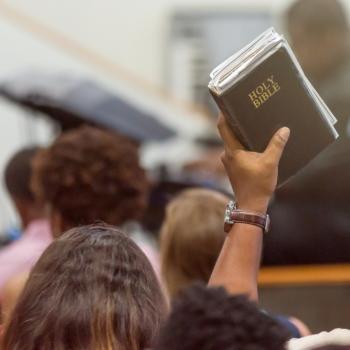 Texas Approves Prop 3, Allowing Churches to Stay Open During a Future Pandemic
Hemant Mehta
About
Get Patheos Newsletters
Get the latest from Patheos by signing up for our newsletters. Try our 3 most popular, or select from our huge collection of unique and thought-provoking newsletters.
From time to time you will also receive Special Offers from our partners that help us make this content free for you. You can opt out of these offers at any time.
see our full list of newsletters