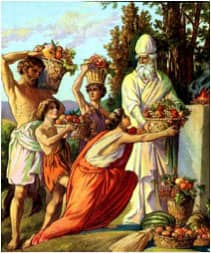 The parsha (weekly Torah portion) for this week is Ki Tavo. Ki Tavo means "when you enter" and they are the second and third words (but first distinctive words) in the portion. Be sure to check out the video at the end of this article.

In this parsha, Moses is giving us more instructions as to what we should do when we enter the land of Israel. The first concept is that of the first fruits. The Israelites are to collect the first fruit of their soil, of the trees and plants they are harvesting, and bring it to the Tabernacle. From there, the priest will acknowledge them and that they have entered the land that G-d promised to their ancestors. Once the priest put the basket at the altar, they were to say:

A wandering Aramean was my father, and he went down into Egypt, and sojourned there, few in number; and he became there a nation, great, mighty, and populous. And the Egyptians dealt ill with us, and afflicted us, and laid upon us hard bondage. And we cried to the Lord, the God of our fathers, and the Lord heard our voice, and saw our affliction, and our toil, and our oppression. And the Lord brought us forth out of Egypt with a mighty hand, and with an outstretched arm, and with great terribleness, and with signs, and with wonders. And He has brought us into this place, and has given us this land, a land flowing with milk and honey. And now, behold, I have brought the first of the fruit of the land, that You, O Lord, have given me (Dt. 26:5-10).

And then they go party with everyone. The stranger, the orphan, the widow, the Levites . . . everyone. They had a big BBQ party.

The people were to do this every year. The idea of tithes wasn't to get the priests rich; it was to provide for the needy. The Levites who gave up their portion to serve G-d, as well as the orphan, widow, and stranger, all benefited from this system. The Israelites were to give a tenth of their yield every year. In the third year, they were to say:

I have put away the hallowed things out of my house, and also have given them to the Levite, the stranger, the fatherless, and the widow, according to Your commandment that You have commanded me; I have not transgressed any of Your commandments, neither have I forgotten them. I have not eaten thereof in my mourning, neither have I put away thereof, being unclean, nor given thereof for the dead; I have hearkened to the voice of the Lord my God, I have done according to all that You have commanded me. Look from Your holy habitation, from heaven, and bless Your people Israel, and the land that You have given us, as You swore to our fathers, a land flowing with milk and honey (Dt. 26:12-15).

Moses reminds us, once again, to follow the laws laid out for us by G-d, noting that we had committed ourselves to G-d and G-d's laws by affirming that Hashem is our G-d and obeying G-d's laws. In return, G-d affirms that we are G-d's treasured people, a holy people to G-d. Since Moses and other elders would not travel into the land with the young Israelites (remember, the punishment for striking the rock and the whining?), they instruct the Israelites to set up stones, large stones, as soon as they crossed the Jordan River, coat them with plaster, and inscribe on them the words of Torah. Then Moses and the priests remind everyone, once again, that the Israelites had become a people of G-d by their own choice and acceptance of G-d's laws, therefore they must observe G-d's commandments.