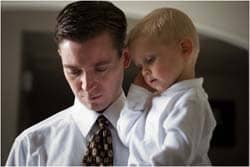 The parsha (weekly Torah portion) for this week is Ki Teitzei. Ki Teitzei means "when you go" and they are the first words in the portion. Be sure to check out the video at the end of this article (there is a donkey in a bow tie . . . I'm serious).

This parsha deals with mitzvot and laws. In fact, 74 of the 613 mitzvot (or commandments) in the Torah are in this very parsha. The first instruction is about a beautiful captive. During war, captives are a necessary evil. Any army can tell you that when you fight another for control of land, you find yourself with captives. If an Israelite were to lust after or find a beautiful woman he wanted to marry among the captives, Moses had these instructions. First, the Israelite had to take her home with him and she had to trim her hair and her nails, toss out the clothing that noted her as a captive, and spend thirty days grieving for her mother and father. Once this happened, he could take her as his wife. If, at that time, he longer wanted her, he had to let her go without selling her as a slave or asking for compensation.

Next is an issue that, as framed, is uncommon today but might actually strike a chord with you. Say a man had two wives and one of those wives he loved very much and one he was, shall we say, less fond of, and each wife gave him a son. Now, the "less loved" wife bore him his firstborn son; however, he could not ignore that this child was the firstborn and treat his second son as the first. The man is required to give the true firstborn son his birthright and the correct portion of what he possesses. Since this deals with children of two wives this may seem difficult to comprehend, but just take that second wife away and think about favorite children. Should a man refuse a birthright to his firstborn because he was not the favorite child?

Speaking of children, in Deuteronomy 21:18-21 we come to an interesting and controversial section (one that, for some reason, my father liked to mention to me whenever I was disinclined to obey him). These are the laws around a rebellious child. First, let's talk about what the Torah says, and then we can talk drash (commentary). The Torah says if parents have a defiant son, who was disinclined to listen to his parents and disobeyed them even after being disciplined, then they were to bring him before the elders of the town. Then they would declare, "This, our son, is stubborn and rebellious, he does not listen to our voice; he is a glutton, and a drunkard." After that, he was to be stoned to death. Whoa, right? Pretty intense.

So then we get into the commentaries. One baraita in the Babylonian Talmud taught that there wasn't a rebellious son and this was only written so we could study it. However, Rabbi Yonatan of the Babylonian Talmud Sanhedrin replied that he says a rebellious son and sat on his grave. However, an interesting commentary comes up around the simple words, "a son" in this portion. The Mishnah interprets the words to truly mean a son and not a daughter but also not a fully-grown man. Now, remember, a son who is a minor cannot be held accountable for his actions (pre-bar mitzvah). His parents hold the responsibility and children were not required to fulfill the commandments until they were counted in the community, at bar mitzvah. Well then, who is considered a son and eligible for this punishment? The Mishnah says, "When does he become liable to the penalty of a stubborn and rebellious son? From the time he produces two hairs until he grows a beard right round. (By which they meant the hair of the genitals and not the face, but the sages spoke in polite terms.)" (Babylonian Talmud Sanhedrin 68b)

Well, this definition seems a little uncomfortable to me. Therefore, I find it much easier to swallow this definition -- a boy of 12 ½ years until he turns 13. Therefore, you have exactly six months for this boy to act rebellious, be disciplined, be rebellious again, be taken to the elders, and stoned. An unlikely timeline. Not only is that timeline unlikely, once the Talmudic scholars were through with this section, they had made this all but impossible. The son had to drink undiluted Italian wine he stole from his parents. Also steal food from his parents, then take it off their property, then bring it back on, then eat it in secret while being seen by two witnesses who don't know him. Then he has to be caught twice . . . The whole event is unlikely. Rather, this section is often referred to as a reminder to us that children should obey their parents, but at some point they must take responsibility for their own actions and accept the communal discipline.