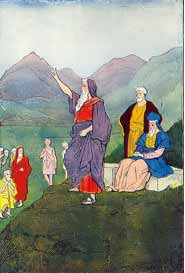 The parsha (weekly Torah portion) for this week is a double Nitzavim and Vayelech. Nitzavim means "ones standing" and is the second word (but first distinctive words) in the portion. Vayelech means "then he went out" and is the first word in the portion. Be sure to check out the videos at the end of this article.

We are at a point now where we are drawing the Torah to a close. This dual parsha is very important. Starting with Nitzavim, G-d expressly asks every Jew to come stand before G-d, to hear and to sign a binding contract with G-d. This isn't a lecture where you can fall asleep in the back; G-d mentions even the woodchoppers and people who draw the water to be in attendance. Not only was every person who was a Jew at that time physically present, the opening of the parsha is written in such a way that it includes each one of us. As well, G-d says that not only is this contract with the people who are present but with each of their children and children's children. It says, "You stand today, all of you, before Adonai, your G-d." G-d also lays out the punishments and blessings for either not following the law or being faithful to them.

Moses reminds the people that in their long trek from the land of Egypt, they passed many groups of people who were idolatrous, who worshiped their gold and possessions. He reminds us not to fall into that trap. And if we take this vow to G-d with our fingers and toes crossed behind out backs, intending to break it, not only will we feel every curse in the Torah (think ten plagues plus more) but also our names will be erased from memory. Pretty steep consequences.

However, G-d never leaves us in a lurch so there is also the repentance aspect. G-d tells us that if we commit these crimes and are in exile, but then return to G-d and follow G-d's laws, G-d will again restore us and our land and fortunes.

Then Moses talks to us. He's breaking it down. Look folks, it isn't that hard . . . it isn't confusing . . . you have two choices. Life and prosperity or death and adversity. Doesn't sound too hard to me! Moses reminds us that it is easier to follow G-d's laws and to love G-d than to deal with the adversity we will find if we reject that.

Now, we are agreeing on a covenant and there must be witnesses, right? Who are our witnesses? The heavens and the earth witness our covenant with G-d . . . pretty cool.

Next we move on to a short parsha called Vayelech. This is really Moses wrapping things up. Okay, I am sure you are sick of me saying that . . . but really, this parsha details Moses' last day. He is 120 years old. Here he reminds the Israelites that G-d told him that he would not be allowed to cross the Jordan River with them. Then he pulled Joshua up in front of the whole of the people Israel. Joshua will be their new leader and Moses reminds him in front of all the Israelites that he is to be strong and courageous. Then Moses goes before G-d to have a chat and G-d requests that Moses bring Joshua in on this conversation. This is the first time they are sharing G-d's presence. G-d tells Moses that this is his last day and the people will break the laws once he is gone. He instructs Moses to write a song and teach it to the Israelites to remember their covenant.

Afterward, Moses writes all this down. He writes the entirety of the Torah down and places it in the Holy Ark. Once this is completed, he calls all the elders of the Israelites together along with heaven and earth to witness against them should they break the covenant. He reminds them to follow the laws and speaks the words of his song. That is where this portion ends. The song continues into the next portion and there we will hear of Moses' death.