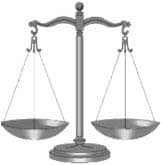 The parsha (weekly Torah portion) for this week is Shoftim. Shoftim means "judges" and it is the first word in the portion. Be sure to check out the video at the end of this article. (You know you want to . . . there's a sheep with a pimple and Dorothy in the City of OZ refuge! Watch it to see if I'm telling the truth!)

The name of this portion is quite appropriate as it sets out the societal construct for the Israelites at this point in their history and going forward. Moses hits on several areas.

Moses advises the people to appoint magistrates and other people to govern the tribes. These were to be members of their community who would be impartial and not be inclined to accept bribes. Here is the famous phrase -- "Justice, justice shall you pursue." Not only was the community to appoint the judges but also they must rigorously investigate crimes. There must be two credible witnesses to a crime and evidence must be meticulously examined.

Again, Moses warns the Israelites to follow the clear laws that G-d has laid out for them. He specifically touches on sacrifices with a defect (not allowed) and adding anything to G-d's sacred altars. If any person were found to violate the laws by worshipping any other deity (or sun, or moon, or stars) then an investigation was to take place. If two witnesses were found in agreement that this person was indeed worshipping an idol or idolatrous idea, than the person was to be stoned . . . with the witnesses throwing the first stones. If, after an investigation, the people could not decide if the person had acted wrongly, they were then to go to the magistrate. The magistrate would then rule and it would be carried out.

Moses informs the people that in every generation there would be people who were to examine and interpret the law. He says, "According to the law that they will teach you, and the judgment they will instruct you, you shall do; you shall not turn away from the thing that they say to you, to the right nor to the left" (Dt. 17:11). If a man questioned and disregarded the magistrate after the case was brought to him, he was to be executed. This seems rather harsh, however, the goal was for the people to trust the magistrates and trust the system, not overrule and disregard it.

As for a king, the Israelites could decide if they would like an overarching ruler to protect them. If this was the case, they could appoint a king, whom G-d selected. The king was to be modest, not own much livestock or have much wealth. He wasn't to have many wives or abuse his subjects. If he followed these rules, studied G-d's laws, and respected the balance of power with G-d, he and his descendants would rule for a long time.

Here, again, the Levites and their piety are mentioned. They were to have no land or portion of the riches, rather, their portion was their connection to G-d. Because they did not have land and therefore, no crops or food, they were gifted with parts of the offerings the other tribes had to bring G-d.

When G-d/Moses speaks about prophets, he makes very clear that the Israelites were not to imitate their neighbors. No tossing children into fire, no sorcery, no talking to ghosts, and no talking to the dead. That is not a part of G-d's law and Judaism and therefore Jews should not partake in any of that. Here it is noted that the people who were being removed from this land, were being removed for these kinds of acts. Also, G-d allows that there may be prophets like Moses again but these were only to be people who were appointed by G-d. Any person who claimed to be a prophet of G-d or who claimed to be a prophet of any other G-d was to die. But how do you know if he is a prophet of G-d or just a fake? G-d has the answer. If he prophesies an event and it does not come true, than the people should not be in awe of him or follow him (Dt. 18:21-22).

Once again Moses mentions cities of refuge to the people. Once the land is settled and divided, they were to set aside three cities of refuge. G-d even made arrangements that if the Israelites gained more land three more cities were to be built. A city of refuge is an interesting concept. If a man accidentally kills another, he may flee to a city of refuge to be safe from the dead man's family. Oftentimes, the family of a person who was killed would avenge the death by killing the killer. In this case, the death was truly an accident and should be judged fairly, not in the heat of the moment. What is an example of this? In Deuteronomy 19:5 it says, for instance, if a man went into the woods to chop down a tree and he swung his axe and it accidentally hit his neighbor and killed him and they were not sworn enemies, then he can escape to the city of refuge to be safe. However, this does not apply if the two men were enemies and the murderer was waiting for his neighbor. This was vital to keeping the situation just and fair.