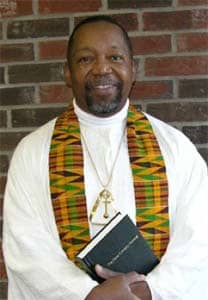 Geoffrey Black has completed his first year as president of the United Church of Christ at a time when the UCC has been emphasizing youth and technology as well as theology and social justice. Like many mainline denominations, the UCC's membership has continued to decline in numbers. Black is the first African American to lead the UCC.

Who have been your models in ministry?

I grew up in Philadelphia in a working-class family whose religious life revolved around a progressive Baptist church. The pastor of that church was E. Luther Cunningham. He was the first African American to serve as the civil service commissioner, and he was important in integrating the city's workforce in the 1950s.

Cunningham went to Lincoln University in Pennsylvania, where he was a classmate of Kwame Nkrumah -- the founder of the nation of Ghana. When Ghana became an independent nation in 1957, our pastor went there for the celebration. That was very exciting for our church, and the experience has shaped my international sensibility. The first time I left the country, I went straight to Ghana. I learned that ministry was more than preaching on Sunday -- it was about engagement in the life of the whole community. It was about justice.

How do you interpret the falling membership numbers in the UCC and other mainline Protestant churches?

The Protestant mainline and the UCC are going through a period of rediscovering what makes us committed to and enthusiastic about the gospel. We have to dig deeper. We cannot rely on the props of the past. America is changing, and we have lost the language that conveys the centrality and compelling message of Christian faith. We have to find a new language that speaks to the realities that human beings are facing.

How should denominations adapt?

More than ever we need voices of reason and deep spirituality. The voices of intolerance and hatred are loud. We need to articulate an alternative. For example, immigrants are going to be the focus of a lot of hostility. We are going to need to find a way to rebuild American society with immigrants as an integral part. There is an innate need for our voices.

The racial divide in American Protestantism between historically black, Hispanic, and white churches needs to dissolve. We need to find strength in the partnerships. In the midst of the decline, these are crucial things that we can be about -- and that may or may not lead to growth.

What in particular does the UCC need to do?

I was a conference minister for the UCC in New York. The entire industrial north has seen population shifts because of the demise of industry. That is a factor in the decline in the UCC's numbers. That's where all of our churches were, and the people aren't there anymore. We need to accept that reality and ask, where are the people now? Our task is to catch up with them and try again to reach out to them with the gospel. It is an increasingly secular environment, so it is not the same task it was a hundred years ago.

I was just talking with a colleague who is working on starting a new church. She said, "We've decided not to build the community around worship as a primary element. Not that we are not going to do worship or be worshipful, but we've decided that the way to engage people might be through service and dialogue."

She talked about how the church members had engaged in a service project and then had worship and reflection at the end of the day. They had volunteers who had come out of desire to do service. Those people were bowled over and very much interested in the worship aspect, but they never would have responded to an invitation to come to a worship service.

In the Protestant mainline, we've not been attentive to a creative approach to evangelism. To a lot of people, that's the e-word. If you say evangelism, manipulative forms of proselytizing come to mind. And that negative sort of evangelism still goes on. People shy away from it. But we have to find ways of sharing the gospel.

The UCC recently decided to make an effort to start new churches. How did that come about?

We have launched an ecumenical, nonprofit, parachurch organization to work on starting and revitalizing churches. It is called the Center for Progressive Renewal. We've decided to do this work ecumenically with the Disciples of Christ, the Episcopal Church, and other partners.

We've come to the conclusion that we need to start progressive churches -- churches that are open and affirming, churches that are about radical inclusivity -- multicultural, multiracial, justice-oriented churches that don't have reservations about being those things. Our identity is crystallizing as a progressive denomination that tries to embrace a spectrum of theological views. That may sound like a contradiction, but this is Christianity: we think it is important to stay in covenantal relationships with the whole Christian family, whose members may be in different places theologically. But the things we share in common are far more important.