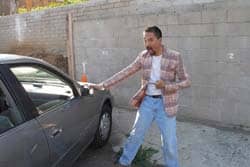 As I was sitting alone in the cafeteria one afternoon, far from home, overwhelmed and lonely on a campus of 20,000 students, an older student walked up, smiled, and asked if he could join me. He took a seat as I prepared to engage him in a heady discussion of politics, philosophy, science. Thrilled to have the company, I was mentally preparing for anything he threw at me.

Glancing up from his plate of spaghetti, he asked, "Have you accepted Jesus Christ as your personal Lord and Savior?"

Stunned, I was completely at a loss for a response. "Um, yeah, actually I have." I finally managed in reply.

"Oh," he said. "Okay, that's good." He wore a look of minor defeat. He had chosen the wrong table; no soul would be won for Christ over this lunch. We chatted politely while I finished my burger. He ate quickly and excused himself. I never saw him again.

I'm sure he sincerely wanted to do "God's work." But evangelism isn't a form of Multi-Level Marketing and the "Good News" isn't an Amway product. The least he could have done was ask my name before trying to save my soul.

For many years afterward I would think of that day whenever I heard the word "evangelism." The term derives from the Greek word evangel: good news. How odd then that so much evangelism appears to be about selling Jesus and hoping that you can convince the unsaved heathen to buy into salvation. Good news doesn't have to be sold. Bad news has to be sold, but not good news.

But this was the way I had been taught during Vacation Bible School classes at the First Baptist Church of Fire and Brimstone. Pass out Jack Chick tracts, recite the canned here's-how-you-get-saved speech, get them to say the sinner's prayer. Above all -- close the deal. They may die at any time and their souls would be lost to eternal damnation if you don't make the sale now. At eight years old I was a cross between Billy Graham and Willy Loman.

Whenever I began to seriously read the Gospels, though, I noticed something strange. People constantly flocked to Jesus despite the fact that he never passed out a single tract. He would walk up to people, say "Follow me" and the next thing you know they're giving up their lives to follow him around the countryside. How does he do it? I'd ask my parents and church leaders. "Well," they'd say as they pondered the question (obviously for the first time), "He is, well, you know, Jesus."

That answer always seemed to be a cop-out. Then one day I was reading the opening lines to Augustine's Confessions:

"Great art thou, O Lord, and greatly to be praised; great is thy power, and infinite is thy wisdom." And man desires to praise thee, for he is a part of thy creation; he bears his mortality about with him and carries the evidence of his sin and the proof that thou dost resist the proud. Still he desires to praise thee, this man who is only a small part of thy creation. Thou hast prompted him, that he should delight to praise thee, for thou hast made us for thyself and restless is our heart until it comes to rest in thee.

The people responded to Jesus the way they did because he is, well, you know, God. He is what our hearts have always been seeking. When we come face to face with him we may accept or reject him. But we can't not know him.

John Calvin claimed that there is an awareness or sense of God (sensus divinitatis) "implanted in all men." The content is minimal: there is a God, He is the Creator, and He ought to be worshipped. The philosopher Alvin Plantinga interprets this as a disposition to form basic religious beliefs about God. But while our beliefs may be rudimentary, the god is not some generic being. Our disposition is to know the one through whom all things were created: Jesus Christ.

In any case, when some very average people came face-to-face with their Creator they were inspired to follow him and to boldly proclaim the gospel.

How different our situation is today. Some Christians (particularly new ones enthused by their budding faith) are still eager and willing to "share Christ." Others have a more difficult time, and many don't do it at all.

I suspect that the average Christian's hesitancy to share his faith, though, has little to do with timidity or lack of courage. After all, many believers have no problem explaining why they support a particular politician or cause, even unpopular ones, yet they become tongue-tied when the topic turns to why they align themselves with the Creator of the universe.

I suspect that much of the fault lies with our misunderstanding of faith. In our age, the term has become almost synonymous with an irrational -- or at least non-rational -- acceptance of beliefs for which we lack evidence. Rather than claiming that we possess both innate and experiential knowledge (justified true belief) about God, we imply that we have a wishy-washy trust that something is out there, though we can't prove it. When we Christians posit such a weak-kneed picture of God it is no wonder nonbelievers don't feel the need to take us seriously.