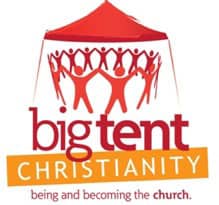 Brian McLaren and I are organizing a major public conference on September 8-9 in Raleigh, North Carolina in order to make the call for a return to "Big Tent Christianity" (see BigTentChristianity.com). Why is this call important?

The Christian church appeals back to a single teacher, Jesus of Nazareth, whom our tradition calls the Christ. The unity of una ecclesia, the one church, was counted among its most important features. But, frankly, we've never done a very good job at the unity thing. The earliest history of the church, "the Acts of the Apostles," chronicles the rapid devolution from "they had all things in common" (Acts 2:44) to the acrimonious battle over whether circumcision should be required of all new (male) believers (Acts 15).

No one can take a church history course without being struck by how much of the church's story is about debates and divisions. Sometimes it seems as though all they did was call each other heretics over ever more obscure matters. At its worst, in the "Great Schism," popes excommunicated popes. On a bad day, it looks like everyone down river from them was working to imitate their example.

The church in this country was no exception. We spawned new denominations like salmon spawn eggs during mating season. Then for about a hundred years, it didn't seem to matter as much. Presbyterians preached predestination and Baptists practiced adult baptism, but (in good American fashion) most people didn't get too worked up about the differences. Most people identified with a religious community. It might have its doctrines and its quirks. Still, it worked for them.

Over the last few decades, however, "church" stopped working for more and more Americans. The decline hit the Protestant mainline churches first. They've been bleeding members and funds for about fifty years. But it now looks like many are finally at that "tipping point" where it becomes impossible even to sustain the old structures. Churches are closing in great numbers. Now the malaise is beginning to spread to evangelical churches as well.

In a word: the old disputes stopped mattering. First, people just wanted religious community, good preaching, and a strong Sunday School program. They didn't much care whether the historical source was Luther, Calvin, Wesley, or St. Thomas. Then things got worse. The younger generations, the Gen-Xers and Millennials, left their churches when they left home, and the vast majority of them never came back.

What are they saying? That churches have become irrelevant to their lives and concerns. That the old styles of church attendance and worship no longer draw them. That the vicious disputes about doctrines are a turn-off. "If that's all that your religion stands for, I can do without it." A staggering 72 percent of Americans between 18 and 29 now call themselves "spiritual but not religious."

A Movement Outside the Old Institutions

This revolution in attitudes toward institutional religion is upsetting a lot of apple carts. But it is not ending the practice of religion. Across the country people are reading and blogging, meeting in homes and pubs, inventing new forms of religious community. They may write cynically about the hostile debates between evangelicals and liberals, but they also carry within themselves a new religious idealism. They find something revolutionary in the Jesus of the gospels. And they're bold enough to ask what Christian communities would look like if they really sought to incarnate the Way that this Teacher lived and taught.

We call it "big tent" Christianity. It evokes the image of the revival tent that folks used to set up just outside of town. Here differences were (ideally) set aside while people sought transformation and a new direction in the Spirit. Today, likewise, vast numbers of people are seeking spiritual answers and communities outside of church buildings.

More boldly, "big tent" is also a prophetic challenge to the rancorous debates and condemnations that are the church's public face today. Christians on the Left and on the Right look more and more like Washington: you are on one side or the other of that great aisle or chasm; everything you say and do plays to your own party. Unity hardly exists, even as a goal. Even Patheos has to offer separate "portals" so that evangelicals and mainliners don't have to enter through the same door.

About Philip Clayton
Philip Clayton is a philosopher and theologian specializing in the entire range of issues that arise at the intersection between science and religion. Over the last several decades he has published and lectured extensively on all branches of this debate,...