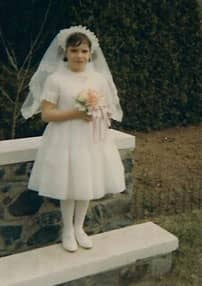 A magnificently voiced organ and the clear treble of the girl's choir combined to sound like angels from on high. The billowing incense seemed to charge the church interior with holiness and mystery, and we knew our innocent prayers would be swiftly borne up to heaven on those spicy, fragrant clouds.

The priests and altar boys wore festive, gorgeous red beneath their impeccably starched or delicately laced surplices, and all around us was beauty, joy, order, meaning, mystery -- and something else: a sense of confident and grave purpose.

At this first Holy Communion, circa mid-1960s, we girls in identical veils and the boys in their blue suits genuflected before entering our pews, and believed ourselves embarked upon a well-plotted journey with few surprises in store. Before us was an altar. A priest -- his back to us -- performed a sacrifice. We did not fully grasp all of it, but we understood sacrifices were pleasing to God; we comprehended that even though this spring day was "about us," we were taking part in something vastly larger than ourselves. Schooled in reverence by dedicated sisters, we knew we would kneel in turn at the altar rail, respond "Amen" to the proffered declaration "the Body of Christ," and then self-consciously stick out our tongues. Thus, we would receive into ourselves -- through a great and holy Mystery of God -- the real, physical Body of Christ, the God-man on the cross who fed the multitudes with bread. Now, He would feed us of Himself.

Returning to our seats, allowing the Sacred Host to melt within our mouths, we had been instructed to speak in secret to Jesus the deepest longings of our hearts, to thank Him, to make Him welcome.

I knelt at my seat, thanking and welcoming Jesus, as I'd been taught, and suddenly I was in the grip of something I had never felt before -- an indescribable sweetness, an overwhelming sense of . . . what, exactly? I could not have then articulated the ringing sense, deep within myself, of "holy, holy, holy" like the peal of a bell. It vibrated up from my core, powerful enough to bring tears, and I did not hide them. I was not alone; beside me a pretty strawberry-blonde named Aileen also wept. Hearing her sniffles, I turned my head and we exchanged soggy smiles in perfect understanding. Something beautiful had happened, and everything leading up to it within the preceding hour -- the music, the reverence, the bowed heads of our parents, the precision of the altar boys, and the seriousness of the priests -- had contributed to this singular moment, and had reinforced it, too.

Afterward, still sobbing, I was led away from my classmates by Sr. Mary Alice, my second-grade teacher, who knelt before me and asked what was wrong.

"Sister, you have to make me repeat the second grade!" I told her.

"Because I want to do that again!" I wailed. "And I can only make first Holy Communion in the second grade!"

Sister assured me that, while I could only make my first Holy Communion once, I could now receive Jesus in the Eucharist "every Sunday -- every day if you want! You will always have this -- the Mass and Holy Communion!"

On that cloudless day, "you will always have this" seemed like a promise one could take to the bank. After all, "this" had been going on, more or less unchanged, for 2,000 years. Taking that into consideration, I was somewhat mollified.

How did it happen, then, that a short time later I found my favorite childhood hymn ("Praise to the Lord, the Almighty, the King of Creaaaaaation") replaced by a congregational rendering of Bob Dylan's "Blowin' in the Wind," our doubtful voices urged on by a swaying man wearing blue jeans and strumming a guitar? Why was our priest preaching, not about sacraments or sin or salvation, but about the wisdom of Paul Simon's "Mrs. Robinson," which told us that -- coo-coo-catchoo -- Jesus loved us more than we knew?

Talk about having a rug pulled out from under you. Seemingly overnight, the genuflections were passé, the organ was silenced and its loft emptied. The chants, which had brought chills and stillness -- even to us children -- were forgotten. The altar rails were down, the women's heads uncovered, the sisters mostly gone, and our priests were facing us at a "table." The Holy Mass that had so recently moved Aileen and me to ecstatic tears had suddenly become unrecognizable, and almost nothing about these changes was explained.

I was a grown woman before a kind priest told me that the lifting of the Friday ban on meat was not -- as I had come to think of it -- the equivalent of a doctrinal tooth extraction that replaced something with nothing and left a gaping hole in my understanding. Who knew that the Council's intent was to free the faithful to choose their own, more personally meaningful -- and therefore more worthwhile -- sacrifice to perform on Fridays, in remembrance of Good Friday?