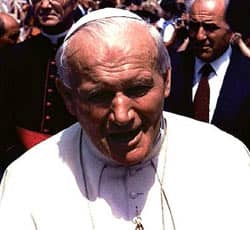 John Paul II was a shaker of world events. He regraded the political landscape of the 20th century and was counted among the few who were responsible for the relatively peaceful demise of the Evil Empire. Pundits were busy assessing his impact in this realm and wondering about his broader political legacy. They were having a hard time of it because, politically speaking, each side that would like to claim the pope for its own has to disregard or discount certain of his actions that seem inconsistent with its views.

Consider: The pope refused to visit South Africa while there was still apartheid, yet he went to Fidel Castro's Cuba, where it is against the law to celebrate Christmas. He saluted the Americans who helped to liberate Europe from the Nazis, yet he criticized the U.S. invasion of Iraq, which he later admitted was a "totalitarian" state. In 1981, he cried out, "My land is bathed with the blood and sweat of its sons and daughters. I put this problem before the conscience of the whole world," but then he disagreed with U.S. sanctions against Poland after the clampdown on Solidarity. He visited groups openly known to oppose the regimes in Stroessner's Paraguay and Marcos's Philippines, both of which disappeared within a year of his trips, yet he decried the "liberation" theology animating the Latin American Left. He vigorously defended the right to private property but excoriated libertarian capitalism as dehumanizing. He criticized the Polish Communists for trying to build "a city without God," yet he told the newly freed Poles not to imitate the West, where he saw signs of "totalitarian democracy." Well aware of the persecution of Christians in certain Muslim countries, he nonetheless allied with them at UN conferences on population and family to defeat the U.S. positions on family and abortion. He established full diplomatic relations with Israel but called the Palestinian demand for a homeland a "natural right."

This can seem confusing, and it is because the pope was not, essentially, a politician. He was a metaphysician, and more. The consistency in the pope's behavior can only be seen within the larger context of the transcendent moral and theological principles guiding him and his particular understanding of the political events to which he had to apply them.

People easily confuse the pope's prudence with his principles. For example, his opposition to the death penalty was not an enunciation of magisterial teaching but the result of his own prudential judgment that, at this particular juncture, it is better to desist from capital punishment because of the larger goal of creating a "culture of life." He never suggested that capital punishment was against Church doctrine. Another example concerns nuclear weapons. Just-war teaching could never allow for the use of weapons of mass destruction designed to kill indiscriminately, and the pope said so. However, despite the pressure to condemn all nuclear weapons, he recognized "the fundamental concern for justice which forces me to maintain the principle of legitimate defense in this history" and a deterrent role for nuclear weapons designed as counterforce in this defense. John Paul II never confused his prudential judgments with the moral principles from which he was making them, but others did and that is why they are confused. History may help bring some clarity.

We are so far into the global war on terrorism that the conflict that defined most of the century that preceded it has almost receded from view, along with the role that the Church and John Paul II played in bringing it to an end. As a foot soldier in the Cold War, I did not think I would live to see its conclusion. I vividly remember the day in 1990 when I read a statement in the Soviet press by Alexander Yakovlev, the Politburo chief of Soviet ideology, that he had finally come to understand that Leninism was based upon class hatred and that this was "evil." Excitedly, I faxed his remark around Washington. Yakovlev's words meant the end of the Cold War and the Soviet empire. The actual deeds of its dissolution soon came in their wake. (Yakovlev spent the ensuing years documenting the persecution of the Church in Russia.)

Language, then, and the restoration of its relationship with reality were critical to the Communist collapse. This was no small feat since, for many in the West, words had lost their meaning. A recovery of meaning was essential before a real challenge could be presented to the East. No single individual did more for this restoration than John Paul II, who insisted upon calling things by their proper names. Naming Communism for what it was required, first of all, the refutation of modern nominalism and radical skepticism. You cannot use "evil" as an adjective until you know it as a noun. Epistemological, philosophical, and theological reconstruction were required and accomplished.