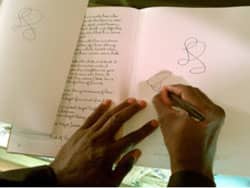 Letter by letter and word by word, Phillip Patterson is on a mission of understanding.

With hands that sometimes tremble from an assortment of medications, the 60-year-old Patterson set out three years ago to write by hand the entire King James Version of the Bible. Each day is a practice in patience, determination, and desire as he meticulously swirls and curls through each word, dotting each i and crossing each t with the precision of a surgeon.

From the dramatic, image-filled passages of Genesis and the epic tale of the Israelites' transformation from slavery to powerful kingdom, to the personal triumphs of Ruth and Esther and the operatic flow of the melodious Psalms, Patterson lives out story after story as they travel from pen to paper.

For as many as 12 to 14 hours a day, Patterson works with an unbridled passion at a project that he may very well never see completed. Ideally, he would like to have the project, entitled "The Serenity of Knowing," finished by next year, which happens to be the 500th anniversary of the King James Version of the Bible.

That scenario seems unlikely, since he is only nearing the midpoint of the project after three years of pouring every ounce of passion in his soul into the undertaking.

The long-time member of St. Peter's Presbyterian Church tries very hard not to place too much emphasis on reaching specific time deadlines. Completing each day is a triumph in and of itself.

The mortality of human life and the fact that the glow of another sunrise is not guaranteed is a fact of which he is all too painfully aware. For the last twenty-four years, Phillip Patterson has lived with AIDS.

The purpose of "The Serenity of Knowing," according to Patterson, is to "honor the Bible" and to "make people aware that there is a message in the Bible for everyone. Sinners -- and we all are sinners -- need to know they have a place."

"I see it as a part of my responsibility," Patterson insists, "to make people understand that the Bible and religion are for everybody."

The former interior decorator says it was not religion that drove him to take on the project, but "a desire to understand what was really in the Bible."

"Most of us have been spoon-fed the Bible," said Patterson. "A verse here and a story there is how we learned the Bible. We know it in pieces, but not as a whole. I wanted to see the big picture and at the same time encourage others to do the same."

Patterson says the inspiration for the project came in 2007 during a conversation with his life partner of twenty years about the similarities between the Bible and the Koran. His partner, who is Muslin, pointed out that in Islamic tradition it is not uncommon for ordinary Muslims to write the Koran word for word.

Patterson responded that Christians probably didn't write out the Bible because it was too long. Patterson says that when his partner told him he should do it, "that was when the thunderbolt struck." Unable to work, he had been searching for something to do with his time that was within his physical limitations. He was also intrigued by a desire to better understand a book that has had such an impact on the world.

"It was like diving into a deep pool headfirst, but not knowing just how deep it really is," Patterson said.

He set out on the project by studying various types of paper, pens, and inks. In his mind, this was far more than scribbling words in a notebook. If it were to be meaningful and inspirational, he would have to take on the project with the perspective of an artist. He chose a moderately heavy 8.5-by-13 watercolor paper and an archival ink that he says will not fade.

Before any writing is done, Patterson rules each page by hand so that each line of text is perfectly straight. He wants each page to look just right. If an error is made and it cannot be corrected, even if it is near the end of a page, the entire sheet is tossed in the wastebasket. Not only does Patterson spend his days copying the word of God, but as each section of the project is completed he also trims pages and binds them into volumes. Three years and several hundred pages later, Patterson has completed four bound volumes and is nearing the end of the Psalms.

He has gained some form of notoriety through the project.

His story has been told in several regional newspapers and magazines. Patterson is quick to point out that he considers himself more spiritual than religious. He does not shun his lifestyle or his Christian faith.

Accompanying Patterson on his sojourn through the scriptures is Laura Glazer. A photographer, artist, and local radio show host, Glazer is an unlikely partner for such a journey. She is Jewish. Between her Torah, Patterson's Bible, and his partner's Koran, the three make for a rather unorthodox trinity.