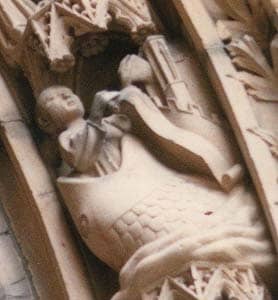 This week, the week of Yom Kippur, we are again breaking with tradition. There isn’t an assigned portion (in the cycle) this week, but rather specific Yom Kippur Torah readings. On Yom Kippur we read Vayikrah (Leviticus) 16:1-34 and 18:1-30. Chapter 16 is read in the morning section of the service and chapter 18 is read in the afternoon.

Additionally, there are special Haftorah portions for Yom Kippur morning and afternoon. These are assigned portions from the rest of our Tanach (Bible beyond just the Torah, including the Niveim-Prophets and Kituvim-writings) that align with the messages of the Torah portion or holiday. In this case, we read Isaiah 57:14 - 58:14 on Yom Kippur morning and the book of Jonah along with Micah 7:18-20. I know this seems like a lot of information but we will break it down here for you and there is a great music video about Jonah from our friends at G-dcast.com at the end!

Vayikrah (Leviticus) 16 and 18 are segments of the Achrei Mot parsha that we read in April. Here’s a refresher. This parsha picks up after two of Aaron’s sons die because they drink too much and bring a sacrifice to G-d’s Tabernacle. At this point, G-d sends us (through Moses) a manual on how to behave to prevent this from happening again. There are three sections of this manual -- meat (how to eat when and where), sex (who and when), then atonement for the "oops" moments that are inevitable. See, G-d knows us and doesn't expect us never to make a mistake. What we read on Yom Kippur deals mainly with the rituals of Yom Kippur (which seems like a good idea to read) as well as the sexual practices. We leave out the food section and the talk about the blood.

G-d gives Moses some instructions for Aaron after Aaron’s sons died. He was not to enter the Kodesh HaKodashim (the Holy of Holies) because G-d, G-dself, was appearing there. Aaron had to bathe (a mikvah) then dress very specifically according to G-d’s instructions, then bring several sacrifices. He had to bring a bull as a sin offering, two rams as a burnt offering, and two male goats as sin offering. These offerings are called Korbanot. The parsha goes into painstaking detail about what Aaron was to do at this time. Then Aaron was to put his hands over a goat and confess all of Israel’s sins, then send the goat off into an unknown, inaccessible area. The last part of this section tells us that on the tenth day of the seventh month, all Jews were to observe a Yom Kippur. This is a day like Shabbat where we don’t work but also we atone for our missteps.

On Yom Kippur afternoon, we read the 18th chapter of Vayikrah. This is the section that deals with sex. This is a biggie with some clear and obvious prohibitions, like you can't sleep with a sibling, but this is also part of the parsha that is oft quoted in relation to homosexual relationships. Here is my drash. First, the language is clearly referring to men. You can't make the inference that it also applies to women or lesbians in the same fashion. So the language is very important in all of the Torah, and that doesn't change here. The text says you shouldn't sleep with a man as with a woman. Nowhere else does it say you don't do this like you do that. So why here? My theory is that it is reminding us that we can't just throw things around without thought. You can't thoughtlessly do this. It is easy for a man to sleep with a woman but it becomes harder for a man to sleep with a man. Harder in many senses. This is not a simple decision. We have to put thought behind our actions. Don't just take the easy way; be mindful. I don't read this as a condemnation of homosexuality.

Both of these chapters are about discipline and order, however the Hebrew text, as always when it comes to Hebrew, is open to interpretation. In many of these prohibitions we see G-d reminding us that we are not like our neighbors; we are the chosen people, we are the tested people (the Hebrew word for chosen is bahar but becherah means tested; same shoresh or root), and we cannot go through our lives mindlessly. This wasn't just a reaction to the death of Aaron's sons but a gift of pro-action for our future.