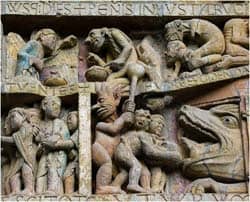 In this season of haunted houses and horror movies, we couldn't imagine a better time to grapple with the subject of demons. In the Christian traditions, demons take center stage in numerous biblical stories and continue to chill us today as central characters in popular and religious culture. But do they really exist outside of our imaginations and nightmares? Are demons real, today?

We challenged a panel of pastors, theologians, and students to help us answer the question. Read their responses, and add your thoughts in the Comments box below.

Are they individual, identifiable, possessing a power of their own? Are they able to override and overrun the innocent without their cooperation, as in the film Rosemary's Baby? No, I don't think so.

...all of this talk of the Enemy and demons can be uncomfortable for me, living in the current century and after formal study in the scientific method. Most demons and devils I have encountered in my patients have been treatable with modern antipsychotics and mood stabilizers. Now in my own spiritual formation as I delve into my inner self, my own "drug resistant demons" become more real to me in my psyche.

I share his reservations. I also have a theological problem with some of the language that we use about demons: The only real, identifiable being with power of its own is God. Every other power on earth either depends upon the power of God, or operates in the shadow of God's absence. So, to talk about demons as if they have a power all their own is the stuff of horror stories, not theology.

But my friend is also right. Some demons are "drug resistant." Hitler's Germany, Idi Amin's Uganda, Pol Pot's Cambodia come to mind. That's also the reason why the language of devils, demons, and evil is so important. When we give ourselves to desires and designs that are aligned against the will of God, the evil we do acquires a consuming force all its own. Although we may be able to account for the ferocity of it to some degree in sociological, psychological, or political categories, the sum is often greater than the parts. In the spiritual world, sometimes 2 + 2 = 8. The language of demons, devils, and evil then becomes profoundly important in naming the spiritual and moral issues at stake -- as well as the very real dangers that they present.

In the end, it is always our choices that provide evil with an opening.

Frederick W. Schmidt, Jr. is an Episcopal Priest and Director of Spiritual Formation and Associate Professor of Christian Spirituality at Perkins School of Theology in Dallas, Texas. He is also the author of several books, including Conversations with Scripture: The Gospel of Luke (Morehouse, 2009).
Back to Responders
Article Continued On Next Page
Page: 1 of 3
10/22/2010 4:00:00 AM
About