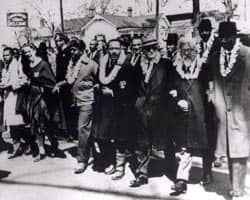 One may as well begin with the dream. Labor Day, 2001. At the Gideon Christian Fellowship, a predominantly African American church located in the Seventh Ward of New Orleans, Pastor Willie F. Wooten stood to address the parishioners who gathered that holiday weekend for the 6 a.m. prayer service he leads every day of the year.

He told them about the dream. As he slept the previous night, Wooten explained, he was visited by God. And God came to deliver an explicit message: “Get on the right side of My people. Start praying for the Jewish state and the Jewish people and bless Israel by donating money directly to the Israeli government.”

Wooten is in his early sixties: fleshy light brown cheeks, black hair succumbing to gray, neat and gracefully combed back. He speaks in a raspy voice rendered coarse from years of delivering the Gospel at high volume.

“And so I told the church that we need to set a budget and give to Israel,” Wooten says. The Gideon Christian Fellowship is a 600-member ministry united by a belief in the Bible as the inspired and infallible word of God. The congregation began holding all night prayer sessions in which attendees cried out to the Lord on behalf of Israel and the Jewish people.

And then there was the money: $25,000 to be exact. But Wooten was stymied. How exactly does one go about giving money directly to the government of Israel? His solution was to pick up the phone and call Ariel Sharon. “The call went straight into his office. It was just amazing,” says Wooten.

Daniel Seaman, the very surprised press secretary who answered the phone that day in the prime minister’s office, gently explained that such a transfer of funds directly to the prime minister was impermissible under Israeli law. In order to support Israel financially, Seaman told Wooten, the church would have to purchase Israeli bonds; Gideon promptly became the unlikely owner of $25,000 worth.

“We tried to give the Jewish people money,” Wooten says, “and here they were telling us how to make money. Isn’t that just like the children of Abraham?” But the urgency of God’s command lingered and Pastor Wooten and members of his congregation set about lobbying the state legislature of Louisiana to invest in the State of Israel. Three years later, on October 14, 2004, the Louisiana Department of the Treasury purchased $5 million in Israeli bonds. Wooten proudly shows me photographs of himself posing with a giant novelty check made out to the “State of Israel.”

Until the 20th century, Jewish Americans were no different in their relations with black people than any other Americans. “They were no worse than anybody else, but certainly no better,” says Cheryl Lynn Greenberg, professor of history at Trinity College in Hartford, Connecticut, and author of Troubling the Waters: Black-Jewish Relations in the American Century.

“It is not that there were no Jews who were abolitionists,” Greenberg continues. “My point is that Jews acted like white people in the sense that their interest was just the same as other white people. Jews in the South tried as hard as they could to assimilate, to be as much like their neighbors as possible so as not to encourage anti-Semitism. And it worked, but the consequence was that they were just as embedded in the system as others.”

The modern relationship between blacks and Jews stretches back to the opening years of the century when African Americans began to migrate to northern cities in droves. They settled into neighborhoods where Jews, most of them recent immigrants from Eastern Europe, lived. Struggling side by side, the two minorities found common cause in a shared demand for equal opportunity in an era when racism and anti-Semitism were overtly prevalent.

This budding alliance was institutionalized when Jews and blacks jointly founded the National Association for the Advancement of Colored People (NAACP) in 1909 and collaborated on the launch of the Urban League one year later. It is a telling sign of Jewish opinion at the time that in 1917, when pogroms in Russia perpetrated by Cossacks against Jews coincided with lynch mob violence against blacks by the Ku Klux Klan, The Forward equated the atrocities in an editorial: “the same soil, the same people.”