Bullying: Sticks and Stones . . . and Words 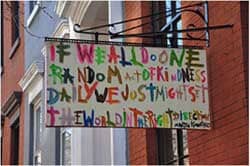 Sticks and stones will break my bones but names will never hurt me. Wrong! Name calling and anti-gay taunts that humiliate and shame are not only hurtful, but can push young people to a point where they feel that the only recourse they have is to end their lives.

This was the case for six young people who committed suicide during the month of September, including the highly publicized suicide of a Rutgers student who jumped off a bridge after his roommate taped his intimate encounter with another male on his dorm room web cam and streamed it live on the internet.

I find myself wondering how many more young people have to die before we realize that disparaging words about gay people have a cumulative effect and directly contribute to the kind of internalized homophobia that leads to anti-gay violence, including that which is self-inflicted.

Often I hear many good people of faith say things like "hate the sin, and love the sinner," or "we love gay people, but we believe God wants to heal them." Although I do not believe that homosexuality is a sin or that gay people need to be healed, I can respect that there are people of faith who hold differing views on this issue.

At the same time, I feel it is my responsibility as a Christian minister to point out that these types of statements contribute to a climate where people internalize the belief that being gay is repulsive. I know this because of the hundred or so people who have come to me for counsel riddled with self-hatred. I will never forget the man in his late 70s who, when my office door closed, began to weep for well over an hour. At one point, he looked up at me and asked the same question I hear many gay people asking: Does God hate me? Will my family or my church disown me?

Whatever we may believe the Bible says or does not say about homosexuality, it seems to me that the Golden Rule, "Do unto others as you would have them do unto you," should hold at least as much or more sway over our lives as people of faith.  If we took the Golden Rule to heart on this issue we would be forced to ask: Would we ever want to be on the receiving end of having someone use words to characterize us in a way that could potentially make us feel as humiliated and desperate as the kids who committed suicide?

The reality is that the six young people who took their lives last month did not come to this point of desperation because of an isolated incident of anti-gay bullying. During the local debate over Lesson 9 last year, we heard story after story from teachers, parents, and playground monitors about kids taunting other kids with gay slurs in elementary school, as early as kindergarten.

Just this week an Alameda, CA elementary school teacher contacted the Community Alliance Resource for Education because a child in her class was being teased. "You look so gay," the child was told.

October is National Anti-Bullying Awareness Month and today marks the beginning of National Coming Out Week, part of a month-long celebration of the history and struggles of gay, lesbian, bisexual, and transgender people for equal rights.

With the tragic loss of six young lives fresh in our minds, my hope is that our school district, our principals, our PTAs, and our teachers will feel the wind at their backs as they continue their efforts to put the K-5 Anti-bullying Curriculum, Links to Literature, and Steps to Respect Curriculum, in place. What we decide to teach our kids, whether in school or at home, can be a matter of life and death. And it is never too early or too late to do what we can to save a life.

This article originally appeared in the Alameda Patch and is reprinted with permission.

Rev. Laura Rose is the senior pastor of First Congregational Church in Alameda, CA, and an ordained minister in the United Church of Christ, a denomination known for its bold stances on issues of justice and its commitment to interfaith dialogue. She writes a regular column for the Alameda Patch called Grounded in Faith.