By Kyle A. Roberts 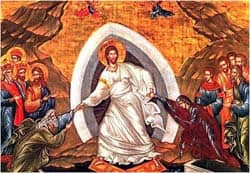 Last week, the world watched with amazement as thirty-three Chilean miners were snatched out of the ground, having spent nearly seventy days trapped a half-mile deep in the belly of the earth. The Chilean government manifested strong, intelligent leadership. The international team of rescuers showed to the world impressive technological skill, bravery, and remarkable attention to detail. How much might have gone wrong? They seemed prepared for every contingency.

The miners gave the world an example in fortitude by enduring together one of the more dire circumstances imaginable. The Great Rescue may be the most powerful example in recent memory of people transcending trials and beating the odds. As the testimonies from the miners and rescuers unfold, there are lessons at seemingly every turn. But at the center of the story lies the inexplicable power of hope. And "hope" has emerged as not just an important theme, but as a lasting name.

Ariel Ticona, one of the rescued miners, watched his youngest daughter born on video from his underground prison. They named her Esperanza (Hope) -- inspired by "Camp Esperanza," the temporary living quarters arranged for friends and family of the trapped miners at the rescue site.

Before the first probe successfully reached the miners, a full seventeen days after the accident, there was seemingly little hope of being found, much less rescued. The miners tell of dark despair; they believed their underground "shelter" would become their grave. As miner Richard Villarroel put it, "I think the worst thing is to pass three, four, five days without food; to know that there might not be any future." As far as he could see, death was about to cut him off from the land of the living -- and from his soon-to-be-born daughter. Because of their vow of silence, whatever happened and whatever was said during their seventeen-day purgatory will never be known by the outside world. It is as it should be: their underworld -- their Holy Saturday -- will remain a mystery to us. How could we possibly understand?

We do know they were battling not just physical hunger, thirst, and dehydration, but psychological and emotional darkness of a magnitude most of us will never experience and could never comprehend. Their battle was not just physical and psychological, but spiritual: between the "principalities and powers." Deep in the bowels of the earth, who would doubt it?

Miner Mario Sepulveda said, "I was with God, and I was with the devil. They fought, and God won." Journalist Mariano Castillo tells us: "Sepulveda said he grabbed God's hand and never doubted that he would be rescued."

Deep underground. Separated from family, friends, fresh air, food, and hope. Caught in a battle between life and death, God and Satan ("the Deceiver").

The rescue of these men, and the role hope played in their survival, suggests a powerful illustration for thinking about the purpose of the church.

When that first probe broke through -- and after it canisters of water, food, and fresh air -- hope broke through with it. They had been found. They were not alone and were not forgotten. A rescue camp had been formed. With the help of technology, they could see and talk to their family and friends. The energies of a national and international community had been galvanized for their rescue. Camp Esperanza was poised for a miracle.

Could the church find inspiration in Camp Esperanza? Perhaps the church is meant to be not a static, magnificent entity or institution, built for the purpose of establishing doctrines and promulgating ideologies, but rather a temporary shelter whose primary -- if not sole -- purpose is to provide real hope for a hopeless world? The church can break through the darkest conditions of people's struggles with rescue probes and canisters of hope and healing. A rescue camp strips away whatever is excessive, self-focused, and extraneous to its central mission. It is formed and shaped by that very mission.

People in every city, town, neighborhood, and country road live "underground." Many of them struggle with an acute awareness of their spiritual despair -- they feel their existential alienation, they sense their separation from God, others, and even themselves. Countless others struggle, though unaware of the darkness in which they dwell. As Kierkegaard put it, their despair, while hidden to their conscious awareness, is no less real.

People caught in a battle between God and the Deceiver need to know that God has won. Isn't this the promise and declaration of the gospels? After the seventy-two missionaries retuned to Jesus, having gone out into the world to proclaim the kingdom, he said he "saw Satan fall like lightning from heaven" (Luke 10:18). This eschatological (future-oriented) vision of Jesus of Nazareth empowers the ministry of the church in the deepest, darkest times and places. As theologian Hans Urs von Balthasar suggests in Engagement With God, Christian hope differs from secular hope in that its source and goal lie in Christ. In the power of the resurrection, Christian hope overcomes the ambiguity and despair caused by the universality of death. In consequence, no practice of care for any segment of society -- whether the sick, dying, or mentally ill -- seems "not worth the trouble." On the basis of Christian hope, bold action in the present is "undertaken as a challenge to the meaningless of this world." The hope of the church, "Camp Esperanza," is the story of Christ.

About Kyle Roberts
Kyle Roberts is Assistant Professor of Systematic Theology and Lead Faculty of Christian Thought, Bethel Seminary (St. Paul, MN). He researches and writes on issues related to the intersection of theology, philosophy, and culture. Follow Kyle Roberts' reflections on faith and culture at his blog or via Twitter.