The Day the Devil Died 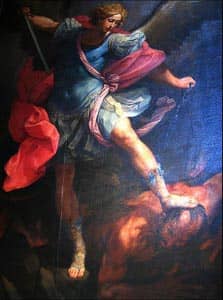 Children starving. Families homeless. Wars around the globe. Hatred. Injustice. The list goes on and on. Because we are existential beings we need to make sense of what happens around us so to give it meaning. This desire for meaning drives us to create a world where everything makes sense, a world where paradox and conundrums are the evil we must defeat.

The irony is that some religious groups in the ancient world saw paradox as a greater companion than fully understanding the world around them. One such group were the Zoroastrians who believed in an anti-god whose sole purpose was to steal, kill, and destroy everything in God's path. He was the God-opposer. He was birthed out of a need for meaning. But even more importantly he was defined out of a culture that rooted a lot of its understanding of the world in mythology. Some of the ancient Jews were in exile with the Zoroastrians, and the view of the Devil seemed to be borrowed after they were removed from exile.

According to the Jewish Encyclopedia: "The Angelology of the Talmud, moreover, proves that, according to the older view (until about 200 C.E.), punishment was inflicted by angels and not by Satan. In the course of time, however, official Judaism, beginning perhaps with Johanan (d. 279), absorbed the popular concepts of Satan, which doubtless forced their way gradually from the lower classes to the most cultured."

The idea of the Devil stemmed from a religion that existed around the same time that Judaism was still forming itself. To recklessly perpetuate the myth of Satan is to perpetuate a spirit of irresponsibility for one another. By focusing all of our energy on a fabled character and blaming him for all of our struggles and pain is to cheapen our experiences as we journey through life.

Pointing the finger at something else or someone else gives our pain purpose; it helps us make sense of all of our struggles. So on one level it makes sense to have the existence of Satan as part of our cosmology. Yet, it is a bad stewardship of acceptance. It keeps us from accepting that we can’t be always be in control, or from accepting the fact that our choices affect us and those around us. It might just be easier if we accept that struggle, pain, and strife are character-building protagonists in our story, that without them, as the ancient Jews believed, life would simply be boring. This isn’t to trivialize or cheapen anyone’s experience of hell on earth; it is to give it even more meaning beyond the typical Christian response.

When Jesus tells Peter to “get behind Him” and calls him “Satan,” Jesus isn’t calling him the person we think Satan is, but most likely was referring to Peter as a person who was blocking his path, or someone who was stepping in the way of what He knew He had come to do.

We can all be Satan.

We can all get in the way of someone’s development. Or a better world. Or a better environment. We can either add to the evils or help remove them.

The irresistible urge to blame a mythological character that ultimately represents one of the potential ends of humanity rests in the demythologization of our empirical reality. When we blame myth, we remove the myth of our own power to be influential against evil. By doing so, we distance ourselves from accepting our own darkness. We participate in what cultural theorist Julia Kristeva calls a hysterical symptom -- a belief in something that we have come to believe is beyond us but is really within our grasp to control.

We have created undue anxiety and forced ourselves into a perpetual state of mythological powerlessness.

In reality, we can be the very Satan that some still fight to believe in. Maybe Halloween in its celebration is the realization of its origin as a time to expel evil spirits. It’s a time of hopeful restoration and justice. It's a time of belief in the ability that evil doesn't and can't have the last word. So as people celebrate this intriguing holiday, may it be a reminder that we have it in us to be the Satan we are trying to get away from. But the opposite is just as true, that we are all artists who have it in us to make the world a beautiful place to be.

George Elerick is a cultural theorist, human rights worker, and author of Jesus Bootlegged, coming in January 2011. He blogs at The Love Revolution.

Read more reflections on the Devil at the What Do I Really Believe? series at Patheos.