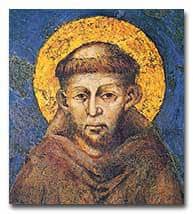 October is a great month for the saints. Yesterday was the feast of St. Francis of Assisi, arguably the most popular and beloved of all the saints. (Arguably.) Here is a meditation on his life from My Life with the Saints. And scattered throughout some recommendations for reading on the saint.

Early in my Jesuit training, if pressed, the most I would have been able to say about him was this: He renounced his father's wealth, founded the Franciscans, loved nature, sang songs, wrote some poems, and undoubtedly died a happy death. (Oh, and he lived in Assisi.)

But as much as I found him a charming figure, my understanding of the world's most popular saint was the rather sentimental one that is common today, as a sort of dopey but well-meaning hippy who talked to birds. As Lawrence S. Cunningham notes in Francis of Assisi: Performing the Gospel Life, such a view is "most completely summed up by the ubiquity of those concrete garden statues with a bird perched on the saint's shoulder found in everyone's garden center." In this conception, Francis was cheerful no doubt, but also a little bland. "Such an understanding is coterminous what I would call spirituality lite."

Francis of Assisi is a good example of why the legends should never overshadow the life. For within his life lie many surprises awaiting those who are willing to meet Francis on his own terms. As Cunningham emphasizes in his book, unlike the figure that many wish to claim for all religions, or for no religion, Francis was deeply and thoroughly Catholic.  At the same time, he did not hesitate to travel to the Middle East, during the Crusades, to make peace with the Sultan. Toward the end of his life, suffering from great physical torment -- including horrible problems with his eyes -- he was rejected by some of his brother Franciscans, who found his way of poverty too difficult to live. When riled, he was far less pacific than the garden-variety Francis, once climbing upon a roof in order to tear down a modest house in which his Franciscan brothers were living, which he found inconsistent with their vows of poverty. Throughout his short life, his actions confused, angered, and annoyed both supporters and detractors. Happily, his real life, which we know a good deal about, prevents him from ever being completely tamed by the legends.

His father, Pietro di Bernardone, was wealthy. This is at the heart of understanding Francis. Though baptized as Giovanni, he was called Francesco by his father, a cloth merchant who loved all things French. (Pietro was on a business trip there during his son's baptism and gave him his nickname upon his return.) As a youth, Francesco was spoiled and dissolute, spending his early years running with, as Thomas Merton called his own friends, "a pack of hearties." At the same time, his chroniclers describe him as a charming and generous young man, well liked in Assisi despite his penchant for pranks and love of the high life. In his superb biography, Julien Green writes, "With his seductive charm, Francesco was the king of all youth, and all was forgiven him."

At the age of 20, Francesco is taken prisoner during a war between Assisi and Perugia, a neighboring town. Though he bore the ordeal cheerfully, his time in jail left him sick and weakened. On his release a year later he decides to become a knight. In preparation for his new state of life, he promptly purchases an expensive suit of armor, complete with a lavish cloak embroidered with gold. His father pays for this, of course, as he paid for all of Francis's early interests. The day after purchasing the armor, according to tradition, Francesco comes across a nobleman reduced to poverty and spontaneously gives him his new cloak. In the 13th century, this would have been an especially charitable action. It was considered to be "more noble" to come to the aid of the poor nobility, since they were not only poor but also shamed.

One night, in Spoleto, en route to his military service, Francesco has a dream in which a heavenly voice urges him to "serve the master, not the man" and return to Assisi. He does so, and begins to find his old life of partying less and less attractive. Over time, he starts living more simply, praying more, and giving alms.