God Is Not One

God Is Not One:
The Eight Rival Religions That Run the World - And Why Their Differences Matter 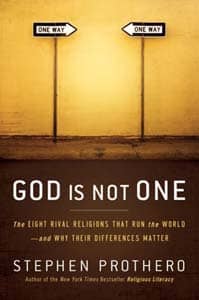 According to many popular religion writers like Karen Armstrong, Huston Smith, and Wayne Dyer, all religions are "different paths to the same God."

Not true, says bestselling author and religion scholar Stephen Prothero. In his new book God Is Not One: The Eight Rival Religions That Run the World-And Why Their Differences Matter(HarperOne; May 2010; Hardcover; $26.99; ISBN 9780061571275), Prothero shows how the world's religions ask very different questions, tackle very different problems, and aim at very different goals. And he explains why this matters both personally and politically.

Beginning with Islam-which of all the great religions has the greatest contemporary impact-he then moves on (in order of influence) to Christianity, Confucianism, Hinduism, Buddhism, Yoruba Religion, Judaism, and Daoism. He highlights the unique contributions each tradition has made to our collective conversation about the things that matter most. And along the way, he explains how each attempts to overcome a different roadblock to human happiness. For example:

To claim that all religions are the same is foolish. And to suggest that these traditions don't matter is not just foolish, but dangerous. Throughout history and across the globe, religion matters.  It has, after all, toppled the Bamiyan statues of the Buddha in Afghanistan and the Twin Towers in New York City. It has stirred up civil war in Sri Lanka and Darfur. It has moved elections in the United States. And it has resisted coalition troops in Iraq.

In God Is Not One, Stephen Prothero supplies readers with much-needed literacy about each of the world's great religions-opening our eyes to the religious clashes that threaten us worldwide, and creating a new context for the study of religion in the 21st century.

Stephen Prothero is the New York Times bestselling author of Religious Literacy and a professor of religion at Boston University. His work has been featured on the cover of Time magazine, Oprah, The Daily Show with Jon Stewart, National Public Radio, and other top national media outlets. He writes and reviews for The New York Times, Wall Street Journal, Newsweek, Boston Globe, Washington Post, USA Today, Los Angeles Times, Salon, and other publications.  Prothero received his BA from Yale in American Studies and his PhD in the Study of Religion from Harvard. He lives on Cape Cod, and he tweets @sprothero.

Praise for God Is Not One:

"[An] enormously timely, thoughtful and balanced book...Prothero debunks not only the fallacy of religious sameness, but also the ‘New Atheists' who have, lately, become so pervasive and culturally relevant." - Los Angeles Times

"God Is Not One [is] a valuable read. It's important to remember that most people aren't mystics, and, as Prothero says, religious differences do matter, especially as our world gets smaller." - US Catholic

"Provocative, thoughtful, fiercely intelligent, and, for both believing and nonbelieving, formal and informal students of religion, a must-read." - Booklist

"Prothero sets up a helpful model for examining each religion on its own terms...a useful introduction to eight of the world's great religions." - Publishers Weekly

"I strongly recommend this fascinating book...[it]  provides one of the best summaries of each of the above traditions that you will find anywhere...[Prothero] makes theology and historical trends come alive." - National Catholic Reporter

"Stephen Prothero has done it again. This is a powerfully-written, paradigm-shifting book. We live in the most religiously diverse country in the world and the most religiously devout nation in the West at a time of global religious crisis. How religious differences can be a bridge of cooperation rather than a bomb of destruction is one of the most important challenges of our era, and on that question Stephen Prothero is as good a guide as you will find." - Eboo Patel, Founder and Executive Director, Interfaith Youth Core, and author of Acts of Faith