The Mormon as Vampire

This article (used by permission from BYU Studies) shows that certain anti-Mormon propaganda in the early 20th century drew on sexual and religious themes from Bram Stoker's Dracula to taint Mormon missionaries, who were ostensibly out to use their hypnotic powers (modeled above) to seduce young women. The full article, originally in BYU Studies 46:2 (2007), with footnotes and images is available from BYU Studies, a scholarly quarterly journal published at Brigham Young University, http://byustudies.byu.edu. 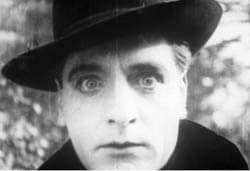 The year 2005 was arguably the centennial of the portrayal of Mormons in the movies, basing the event on Thomas Edison's A Trip to Salt Lake City (1905), the earliest extant nickelodeon short subject dealing with Mormons. This auspicious anniversary was marked at an art house theater in New York City by a week of screenings -- dubbed "Mormonsploitation" -- of early Mormon-themed motion pictures, including the 1922 British film Trapped by the Mormons and its 2005 shot-for-shot silent black-and-white remake that served, according to The Village Voice, as "the anchor of the series." The remake, directed by ex-Mormon Ian Allen, stars "drag king" Johnny Kat as Mormon missionary Isoldi Keene, equipped, according to the Washington Post, with "hypnotic powers" with which he "lures young women [one young Nora Prescott in particular] away from their families so they can be sent to Utah, where terrible fates -- including polygamy -- await them." A Salt Lake City film critic described Keene's wives as "vampire brides" engaged in a "blood-drenched" battle with Nora's rescuers that gives the film a more potent, sexually oriented 21st-century tone. Allen's obvious connection of Keene's powers to vampirism invites background research into the original Trapped by the Mormons and the sensational novel on which the film's scenario was based.

The undead, the living dead, Nosferatu, Walpurgis Night. These and other terms, now a familiar part of vampire lore, have appeared in the mythology of various parts of the world for at least three thousand years. However, they were first brought together in modern times with the 1897 publication of Dracula. Abraham (Bram) Stoker brought to the changing turn-of-the-century world (especially Great Britain) a drama of superstition, vampires, spells, and potions from the old world and placed them in a modern-day setting. This essay will demonstrate that the extremely popular images created by the book found their way into aspects of England's anti-Mormon crusades and into a book, The Love Story of a Mormon, written in 1911 by one of the movement's most prolific literary crusaders, Winifred Graham. Such images were also successfully translated into a motion picture version of her novel, produced in England and released in 1922 with the title Trapped by the Mormons.

Fifty years old when he published his atmospheric tale of a vampire preying on unsuspecting victims in London, Stoker had spent much of his life as the personal assistant of the great English actor Sir Henry Irving at Irving's Lyceum Theatre in London. Through his activities connected with the world of theater and travel, Stoker learned of, and became fascinated by, the age-old tales of vampires that originated in what is now Romania. Unknown to Stoker until after he was well into writing his novel, many of those legends were mixed with the real-life exploits of Vlad Tepes, the historical Dracula, who was in reality a 15th-century Romanian nobleman and general who, in order to discourage further invasions by the Turks, impaled his conquered enemies on wooden stakes. One account numbers his victims at twenty thousand. Vlad's father garnered the sobriquet "Dracul" from a Catholic paramilitary organization to which he belonged. In Romanian, Dracul means "devil," and a at the end signifies "son of." Dracula was, by most accounts, aptly named. Combining this historical figure with folktales from the Transylvania region, Stoker named his king of the vampires Count Dracula.

The cultural climate during the closing decade of the 19th century in the United States, Great Britain, and Europe was filled with popular references to vampires. The first stage melodrama, Le Vampire, by Charles Nodier, Achille Jouffroy, and Pierre Carmouche, had been presented in Paris in 1820 and imitations soon followed. James Malcolm Rymer's mass-marketed novel Varney the Vampire: or, The Feast of Blood (1847) coincided with the birth year of Bram Stoker. In 1897, Phillip Burne-Jones's painting The Vampyre was displayed to acclaim at the New Gallery in London, perhaps because his cousin, Rudyard Kipling, wrote a poem of the same name for the exhibit catalog about "a rag and a bone and a hank of hair." A successful play, A Fool There Was, which takes its title from the first line of Kipling's poem, written by Porter Emerson Browne in 1906, later became a novel as well. In the painting, the poem, the play, and the novel, references to a woman as a vampire were explicit. The 1915 film A Fool There Was established Theda Bara as a major movie star and assured the success of the new Fox Film Corporation, now Twentieth Century Fox. Theda Bara, from then on known as "The Vamp," inspired an additional entry of the word -- as both a noun and a verb -- in Webster's Dictionary.