No Devil: The Horned God of Wicca

Listen to the words of the Great Father, who of old was called  Osiris,
Adonis, Zeus, Thor, Pan, Cernunnos, Herne, Lugh and by many other names:
"My Law is Harmony with all things.
Mine is the secret that opens the gates of life
and mine is the dish of salt of the earth
that is the body of Cernunnos that is the eternal circle of rebirth.
I give the knowledge of life everlasting, and beyond death
I give the promise of  regeneration and renewal.
I am the sacrifice, the father of all things,
and my protection blankets the earth."
~ The Charge of the God

Where did the Christian Devil get his horns and hooves? The image for the Devil as we picture him today was lifted from Pagan Gods, most specifically the Greek Pan. Yet just because it looks like a duck doesn't mean it walks, talks, and acts like a duck. Modern Wiccans worship a Goddess who tends to be celestial and a God who generally wears horns, but the resemblance to the Christian Devil stops there. 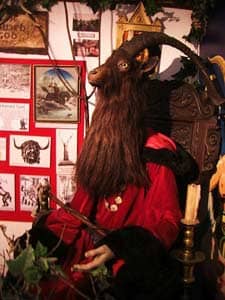 There are so many ways to write about the Horned One that when beginning this article I was at a loss about how to tackle the subject. In the interest of sincerity I decided to write from a mythological perspective, rather than a dry recounting of Wiccan history and scholarly opinions. This is what my heart has to say about him, and as they say, your mileage may vary.

Lord of the Wild, of the Hunt, of Animals, Lord of Death and Rebirth . . . We all know the epitaphs. We've all seen the images made by our ancestors. Although the God is also the Green Man, the Sacrificed King, and the Sun Child, we call him the Horned One. Why do we cling to this image of him?

Living in Christian cultures, we are surrounded and bombarded with images of Jesus. Jesus and lambs. Jesus on the Cross. Jesus the Infant, halo-crowned in a manger. Truly the only God-image we have that hasn't been co-opted and embraced by the Christian faith is the Horned God. That which they revile, we adore, and this is key to understanding both the God of Wicca and Wicca itself.

Wicca, through its proven history and its mythology, is a revolutionary religion. The legend of Wicca suggests that the religion reached its current form and order when the Pagan religions were eradicated or pushed underground by the growing influence of the Catholic Church. Far from the bright heyday of Eleusis, Paganism became transformed into a gothic dream: midnight meetings cloaked in secrecy.

The Goddess was far more easily passed off as the beautiful, celestial radiant Virgin Mary and perhaps of less interest to Inquisitors. The God, with his horns, his hooves, his animal wildness, could never be mistaken for Christ. It is in his stubborn obstinacy, his refusal to be assimilated, that he becomes the revolutionary force behind Wicca. Looking at the mythologized past of Wicca it is easy to see how meaningful a God bearing horns would be to a people who are living under religious oppression and fear. A God who represents all they cannot express, who in his appearance is a symbol of the interdependence of man and nature, who as Lord of Death and Rebirth reclaims the souls of his Witches for rebirth into the tribe of the faithful.

Both the Charge of the Goddess and Charge of the God speak of the promise of rebirth and reunion. In some ways it's an odd emphasis for a religion so concerned with nature, fertility, and reincarnation. Looking at Christianity from a Pagan perspective might explain this emphasis. Christianity is very concerned with your soul. It is your soul Christ wants, bound to him and called up into his spiritual realm at the appointed time. If you are not Christian out of faith, but baptized from fear, that is a horrible concept to imagine. Your soul is trapped, away from the earth and your loved ones, then whisked away to a realm far from your beloved earth and tribe.

The Charge of the Goddess assures us:

For Hers is the secret door which opens upon the land of youth and
Hers is the cup of wine of life,  and the cauldron of Cerridwen,
which is the Holy Grail of immortality.
She is the gracious goddess, who gives the gift of joy unto the heart of man.
Upon earth, She gives the knowledge of the spirit eternal; and beyond death,
She gives peace and freedom, and reunion with those who have gone before.
Nor does She demand sacrifice, for behold,
She is the mother of all living, and Her love is poured out upon the earth.