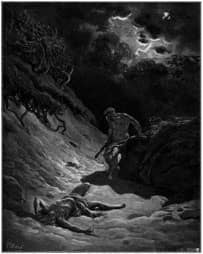 Why is this significant, other than the obvious lessons about brothers and love of G-d? Here we see a second example of G-d's direct communication with man. We see this type of communication for a while until we prove to G-d that we just can't handle it. Toward the end of the Torah, G-d changes tactics and doesn't directly communicate with all of the Jewish people.

The parsha continues to follow Cain's line. He had a son, Enoch, and named his town after him. Then Enoch had a great-great-grandson whose name was Lamech, who had two wives named Adah and Zillah. The parsha further details their family. We also learn that Adam and Chava had a third child named Seth. He had a son named Enosh. After Seth, Adam had more children, both sons and daughters. Adam lived, it says, 930 years! The parsha details some of Adam's children and their lifespans -- Seth: 912 years, Enosh: 905 years, Kenan: 910 years, Mahalalel: 895 years, and Jared: 962 years. Jared's son, Enoch, lived 365 years and his son Methuselah lived 969 years. His son Lamech lived 777 years and was father to Noah. Noah lived 500 years before he had his three sons: Shem, Ham, and Japheth.