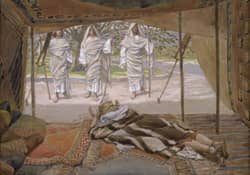 The parsha (weekly Torah portion) for this week is Vayeira. Vayeira means “and He appeared,” and it is the first distinctive word in the portion. Be sure to check out the video at the end of this article!

This week’s parsha comes on the heels of a very big event. Last week, we left off with Avraham being circumcised along with his son and all the men of his group. This parsha picks up three days after the circumcision. Now, I wouldn’t know about this, being a girl and all, but according to what I have heard, the pain on the third day after the circumcision is the worst. Three men/angels came to his home. Avraham was known for his hospitality and ability to give love. He ran out to greet his guests, offered to bathe their feet (which was a common welcoming custom at the time) and give them food. Abe ran to Sarah to get her to prepare the bread while he prepared a calf to eat along with some cream. While they ate, the angels asked after Sarah and here they delivered a big prophesy. Here they tell Abe that he and Sarah will have a son in the next year. Sarah laughs. She is 90 years old at this point. How can she give birth to a child? G-d admonished Sarah for laughing in doubt. Why? Because G-d is G-d and G-d can make anything happen. So the men get up and start to head out to their next location . . . Sodom, where Abe’s nephew, Lot, lived.

Here we have an unusual passage. Chapter 18, verse 17 says: “And G-d said, ‘Should I conceal from Avraham what I am doing?’ Why would G-d ask this question? G-d is all knowing and if we believe that G-d is infinite, how can we believe that G-d questions G-d’s actions? Rather than G-d questioning G-dself, G-d is letting us know that since he gave all this land to Abe, he deserves to know what is going on. So G-d tells Avraham that since G-d has heard the cries from Sodom, Gemora, and three other cities, G-d is now going to “descend and see.” [Again, why should an almighty G-d need to “descend” to see what is going on? Rashi, a sage who gave us a great commentary on the Torah, tells us that it is, in fact, a direction to judges. You cannot rule on a capital punishment case without seeing/investigating for yourself.] So the men who were visiting Abe (minus one) went to Sodom and Abe stood there with G-d.

Avraham asks G-d, “Look, you can’t really destroy the good with the bad, can you? What if there are fifty righteous men to be found? Can you save it for fifty?” Why fifty? Because there were five cities and Avraham was asking for ten men from each city. [Why ten? Prior to Avraham, the world had been destroyed by a mabul (a flood) because there were no righteous men, only Noah and his family. That is eight people (Noah + wife + three sons + wives =eight) plus G-d equals nine righteous entities in the world. If G-d destroyed the world with nine righteous souls, wouldn’t at least one more make the world worth saving? So Abe asks for ten from each town.] But there weren’t fifty. So Abe thinks, what if there were only nine per city, so forty-five total? Couldn’t G-d make the tenth and save them? G-d agrees. Then what about forty (meaning four cities saved and one not)? G-d agrees. Then what about thirty (meaning three cities saved)? G-d agrees. Then what about twenty (meaning two cities saved)? G-d agrees. What about ten righteous people, G-d? Will you leave one city intact? G-d agrees. Mind you, Avraham wasn’t just bargaining himself down; in between each step they looked and could not find enough righteous people. Abe lands at ten people and as we pointed out before, Abe wouldn’t go below ten because he knew that G-d had already destroyed the world in the Generation of the Flood. Finally there wasn’t any more to be done and G-d and Abe parted.

Chapter 19 opens with two angels coming to Sodom. [Think back to the beginning. How many men/angels came to Avraham? Three. Where did we lose one on the way? Well, Rashi teaches us that every angel has only one specific mission. They aren’t big on multitasking; so one angel had completed his mission when he told Sarah that she was going to have Isaac. One was supposed to destroy Sodom and the other four cities, and the other gets Lot and his family to safety.] So these two guys show up and Lot sees them. He knows where he lives and what these people are like. He invites them in, offers to wash their feet and encourages them to stay with him but they refuse. Lot, again knowing his neighbors, urges them to stay with him and eat. The men accept. They ate and drank and enjoyed themselves . . . until the neighbors come a-knocking. They surround Lot’s house and demand that he send out the newcomers so they can have a little fun with them. They specifically say that they want to be intimate with them. Lot, thinking he can put them off the guests, begs that they leave them alone but in their place offers his . . . ready for this? Virgin daughters. Yes and yikes. They push Lot up against the door but the men/angels grab him and bring him in the house then the people who had gathered were struck with blindness that kept them from attacking the house.