The Pharisee and the Tax Collector: Lectionary Reflection on Luke 18:9-14 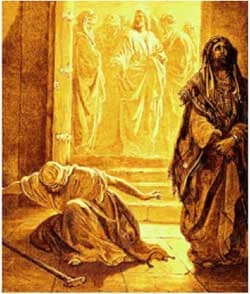 Lectionary Reflection for October 24, 2010
The Pharisee and the Tax Collector:
"Arrogant forever? Unworthy to the End?"
Luke 18:9-14

This week's parable is one of two men who each offer prayers, with surprisingly different results. It reveals a couple of Luke's favorite foci: on prayer and on God's mercy to outcast sinners. It reveals the combination of realistic, yet strange, details and the presence of paradox to undercut conventional understandings of the kingdom of God. That two people go to the Temple to pray, one of whom is a Pharisee, is unremarkable. What is strange is that one of them is a tax collector. Tax collecting was one of the occupations forbidden to Jews. Tax collectors were viewed as ritually impure and as dishonest. In a country exploited through widespread taxation, they were highly unpopular. (See John Donahue, The Gospel in Parables, 187-188.) The paradox in the parable lies in the fact that someone viewed so negatively by the established religion and the people should be the one "justified" or accepted by God for his prayer. The other half of the paradox is that someone viewed positively by the people, the Pharisee, should behave in a blatantly self-righteous manner.

Before the destruction of the Second Temple in Jerusalem in 70 C.E., the Pharisaic way of life was practiced by a relatively modest group of men and women. It had no political power. It was favored by the people because it took Jewish tradition and the Torah seriously and tried to interpret and live them in ways that touched daily life. The Pharisees taught the people to regard the gathering around the household dinner table as a community of worship. The handling of food and dishes were religious activities.

After the destruction of the Temple in 70 C.E, when the institutions of Jewish life were disrupted by Roman violence, the Pharisaic tradition of teaching and living was a force that enabled the survival of the people. (See Luise Schottroff, The Parables of Jesus, 7-8.)

A lot of interpreters of this parable make the mistake of assuming that the Pharisee in the parable is representative of all Pharisees, that it was a religious movement founded on works alone and despising others. The story is not intended to show, illustrated by this one Pharisee, that this is how all Pharisees are. This negative perspective on this parable and on Pharisees in general is reflected by our common use of the word pharisaic, which we take as synonymous with self-righteousness.The listeners of Jesus' day would have expected the Pharisee to be a careful observer of the Law, in keeping with their generally high view of the Pharisaic movement. They would not expect the tax collector to go to the Temple at all. The parable serves up two behaviors that are out of character: that the Pharisee prays in a self-righteous manner, and the tax collector prays at all!

The contrast between the two prayers is impossible to miss. The Pharisee stands apart, probably so that his litany of virtues can be heard by other worshipers and by the tax collector. The Pharisee's prayer keeps the focus on himself. It is "I" this and "I" that. His list of virtues divides the community rather than unifying it. It perpetuates the us/them dichotomy we often use in thinking of other people.

The tax collector stands, on the margins, ‘beating his breast.' This is a physical gesture associated with women rather than men in the Ancient Near East, emphasizing the unexpected nature of his actions. He keeps his head bent. His words are simple. He does not embark on an eloquent litany of his sins to match the Pharisee's virtues. He hopes in God alone, not in an extravagant outpouring of remorse. Like other powerless outsiders in Luke and in the Old Testament, the poor, the widow, the stranger, the tax collector casts himself on the mercies of God, and God hears and upholds his prayer.

Stories invite us to identify with characters. Human nature being what it is, we like to identify with the more positive characters in a story. The Pharisee would not be my choice of a character with whom to identify.  If I identified with the Pharisee, that would be like admitting that I am proud of my adherence to certain moral values. It would mean I secretly felt that my credentials and education and good intentions made me better than other people and more deserving of God's attention and salvation. It's too threatening to identify with the Pharisee in this parable. People of Jesus' day would have been surprised to see a respected religious professional showing his arrogance like this. What would people of our day think of us if and when we allow a hidden arrogance to show, however briefly?