An Interview with Michael Sullivan
By Patheos staff

Before the debut of the landmark PBS series, God in America, Patheos sat down with some of the key figures involved in the series. In this interview, executive producer Michael Sullivan discusses the uniquely American approach to God, religious debates that won't go away, and the challenge of distilling hundreds of years of history into just six hours. Sullivan has supervised the production of many major PBS projects, including Faith and Doubt at Ground Zero and The Mormons.

What's unique about God in America? How is this different than "God in Europe" or "God in Anywhere Else"?

This is a theme that tends to be a bigger part of our daily life than it tends to be in Europe and other western developed countries. I think this is primarily because we launched this early experiment in religious liberty. We opposed established churches; we created this wide-open religious marketplace where religion could keep changing and people could form new denominations if they didn't like what they were getting. Because they could move off and do something else, new innovations would come along. The result was that people could get the religions that they wanted, basically, as time moved on, because of this marketplace.

I think that's one aspect of it -- that America is a more religious place because we established religious liberty. The second part of it is that the religious aspect has remained a much more intense aspect of our political and public life than it has in other countries. As Stephen Prothero said in the series, Americans have always felt that they have a "special" relationship with God, and this may go back to John Winthrop's "city on a hill" idea. And this idea was transferred from this small Massachusetts Bay colony to an entire country, and people keep picking up on this idea -- this kind of American exceptionalism that's religiously based.

When you were in the process of creating the series, what was it like in comparing the past and present debates of the age? Are they more similar or different with the passing of time?

The experience with John Hughes and the Catholic assimilation maps pretty brilliantly onto this current issue of the Islamic center in Lower Manhattan. It feels like a pure echo of that anti-Catholicism back in the 1830s and 1840s. We did this series because we knew these were continuing issues in America, both including new people and fighting about the proper role of religion in the public sphere, including in public schools. Of course, when we started years ago, we had no idea of this Lower Manhattan controversy. But the current controversies we're going through do map beautifully onto that section, with the Quran-burning and the struggles over the Islamic center, or even controversies over President Obama's personal faith.

What we were trying to do is not to deal with the current controversies so much, although we do mention them briefly at the end of the final hour of the film, but to give people a rich historical context for anything that comes along in the future, so we know where we've been, how we've defined the issues in the past, how we've struggled, and overcome our struggles. The thing about the Catholic story is that it's very ugly, but in the end, Catholics became part of the American scene, and in the end we were inclusive. So there are going to be fights, but the trend is toward inclusiveness over time.

In this project, you had to distill hundreds of years of stories into just six hours. What did you leave on the cutting room floor that you really wish you could have included?

I don't really think of it in those terms. We knew early on we couldn't do everything -- we couldn't include every denomination and tell everyone's story. We told ourselves that we would try to be as broad and diverse as we could in telling the story we needed to tell, but that we were going to look for emblematic stories that reveal the central dynamics of this history. We could have picked a dozen stories in talking about the Second Great Awakening, and we chose the Methodist story. It seemed the best emblematic story of that time period.

We also knew that if we tried to pick a bunch of little stories, it wouldn't work. We still had to tell stories in some depth to make it work.

Dialogue on Prayers to Saints & for the Dead
Dave Armstrong
2 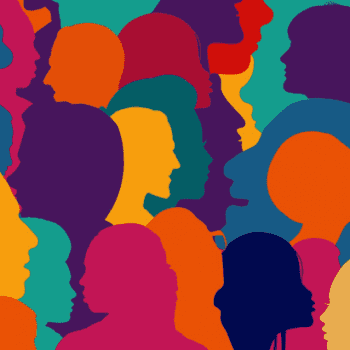 We Share the Dignity of God From God, of Light From Light
Fr. Stephanos Pedrano, O.S.B.
4

Abortion Funds Are Vital Infrastructure
Adam Lee
Get Patheos Newsletters
Get the latest from Patheos by signing up for our newsletters. Try our 3 most popular, or select from our huge collection of unique and thought-provoking newsletters.
From time to time you will also receive Special Offers from our partners that help us make this content free for you. You can opt out of these offers at any time.
see our full list of newsletters
Editor's picks See all columnists