Buy or Download BE LOVE NOW by Ram Dass 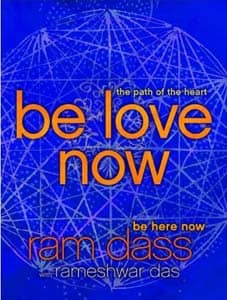 Forty years ago, the publication of Ram Dass' Be Here Now sparked a revolution and inspired a generation to see the world in a different light, opening their eyes to a brand new spiritual path.

Now, reaching out to a new generation of readers, Ram Dass brings the world a powerful message of love and awakening. In Be Love Now: The Path of the Heart(HarperOne; November 2010; Hardcover; $27.99; ISBN 9780061961373), the celebrated teacher guides us through pitfalls and perils of our own spiritual journey.  Offering a deeply personal yet universal exploration of what he has learned on his four-decade pilgrimage across cultures and religious traditions, Ram Dass shares powerful lessons on love, including:

Combining timeless teaching stories, personal anecdotes, and soul-stirring insights, Be Love Now, shares Ram Dass' rich experiences while offering enduring insight into what is most important. In addition, the first E-book edition of Ram Dass' iconic Be Here Now will be released in November 2010, coinciding with the publication of Be Love Now-the final installment in this powerful trilogy.

Here's what other popular spiritual teachers are saying about Be Love Now:

"A gift of love from the man who introduced me to the idea of higher consciousness and became one of my greatest teachers." - Dr. Wayne Dyer, author of The Power of Intention

"Read this delicious, ecstatic journey and be awakened, be pulled body and soulinto the heart of love."- Jack Kornfield, author of A Path with Heart

"Ram Dass is one of our greatest teachers." - Deepak Chopra

Ram Dass first travelled to India in 1967 as Dr. Richard Alpert, an eminent Harvard psychologist. There he met his guru, Neem Karoli Baba (affectionately known as Maharaj-ji), who gave Ram Dass his name, which means "servant of God." Upon his return from India, Ram Dass became a pivotal cultural influence and has served as a guiding light for over forty years, carrying millions along on the journey. He is the co-founder of the Seva Foundation and lives in Maui, Hawaii.

Rameshwar Das is a writer and photographer who met Ram Dass in 1967.  He was inspired to go to India and was given the name Rameshwar Das by Neem Karoli Baba. He lives with his family on Long Island.

The Enhanced E-book edition of Be Here Now, which will be released in November to coincide with Be Love Now, features exciting new assets, including:

Return to the Patheos Book Club for more resources on Be Love Now, including an excerpt, a Q&A with Ram Dass and an online discussion about the book.