Christ the King, Then and Now

He hung there waiting to die, on a cross next to Jesus. He was a condemned thief paying his debt to society. Yet, in a remarkable moment of clarity amid the chaos, noise, and mockery surrounding them, Dismas -- forever immortalized as "the good thief" -- acknowledged Christ the King:

And what looked like a dead end was just the beginning for Dismas, for he was personally canonized as a saint by Christ the King himself with the words, "Truly, I say to you, today you will be with me in Paradise" (Lk. 23:43).

This Sunday, Catholics celebrate the last Sunday in Ordinary Time with the feast known as the Solemnity of Christ the King. While it signals the end of the liturgical year, it also points to the ultimate destiny of every Christian life -- the day when each person will meet Jesus Christ face to face.

It might serve us Catholics well to ponder the truth of Christ the King in our midst.

Is Christ "king" in our minds and hearts? In our families? In our world?

Are we even capable of relating to the idea of kingship in a modern world dominated by governments very different from that of a kingdom?

This feast was added to the liturgical calendar at the behest of Pope Pius XI in his encyclical Quas Primas in 1925. He reasoned that this feast might better assist our understanding of Christ as king.

This doctrine is not new; it echoes what the Scriptures have long proclaimed.

The Old Testament foretold of Christ's coming as a powerful monarch, unlike any before him: "Thy throne, O God, is for ever and ever; the scepter of thy kingdom is a scepter of righteousness" (Ps. 45:6).

And the prophecy of Isaiah is well known:

For a child is born to us and a son is given to us, and the government is upon his shoulder, and his name shall be called Wonderful, Counselor, God the mighty, the Father of the world to come, the Prince of Peace. His empire shall be multiplied, and there shall be no end of peace. He shall sit upon the throne of David and upon his kingdom; to establish it and strengthen it with judgment and with justice, from henceforth and for ever (Is. 9:6-7).

The Kingship of Christ is clearly confirmed in the New Testament, as the Incarnation is revealed to the world through Mary. The Archangel announced to the Virgin that she would bear a Son, saying "the Lord God shall give unto him the throne of David his father, and he shall reign in the house of Jacob for ever; and of his kingdom there shall be no end" (Lk. 1:32-33).

These scriptures harken to the coming Advent season while affirming the identity of our King and Lord.

Pius XI clearly sought to identify Christ's kingship as both a need and a reality in the life of the world, and in the life of the individual, "that they may so order their lives as to be worthy of faithful and obedient subjects of the Divine King" (Pius XI, Quas Primas, par. 29).

And how might we order our lives under the Lord's Kingship?

First, we do well to recognize that we share in Christ's kingship through baptism, when we were anointed as priest, prophet, and king. That is, the King of Kings has taken up residence within you, giving you a royal dignity, despite what your circumstances may look like.

Jesus Christ is the one whom the Father anointed with the Holy Spirit and established as priest, prophet, and king. The whole People of God participates in these three offices of Christ and bears the responsibilities for mission and service that flow from them. (Catechism of the Catholic Church, par. 783)

Second, calling on the grace of baptism, we must live out our baptismal call to holiness.

The People of God share in the royal office of Christ. He exercises his kingship by drawing all men to himself through his death and Resurrection. Christ, King and Lord of the universe, made himself the servant of all, for he came "not to be served but to serve, and to give his life as a ransom for many." For the Christian, "to reign is to serve him," particularly when serving "the poor and the suffering, in whom the Church recognizes the image of her poor and suffering founder." The People of God fulfills its royal dignity by a life in keeping with its vocation to serve with Christ. (Catechism of the Catholic Church, par. 786)

Like Dismas, such an understanding may have profound and eternal consequences.

The Church ends its liturgical year by honoring Christ the King, the Lord of Glory.

And within that same liturgy, St Paul's epistle signals the coming Advent that rejoices in Him in whom all things hold together. 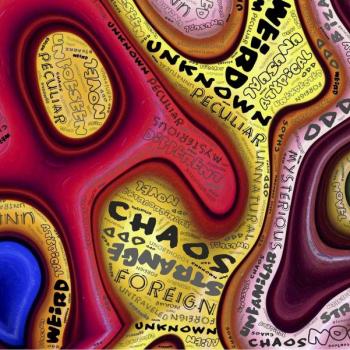 FASH 101: I Can't Believe It's Not Fascism
Gabriel Blanchard
3

Baptist Pastor Who Told Wives to Lose Weight Has Taken a "Leave of Absence"
Hemant Mehta
Get Patheos Newsletters
Get the latest from Patheos by signing up for our newsletters. Try our 3 most popular, or select from our huge collection of unique and thought-provoking newsletters.
From time to time you will also receive Special Offers from our partners that help us make this content free for you. You can opt out of these offers at any time.
see our full list of newsletters
Editor's picks See all columnists