Editors Note: The following is an excerpt from John Gibson's: The War on Christmas 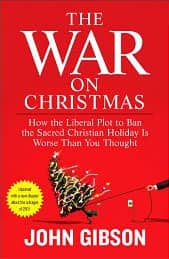 In the United States of America, a nation overwhelmingly Christian (authoritative polling figures range from 72 percent to 84 percent), literally any sign of Christmas in public can lead to complaints, litigation, angry protest, threats, and bruised feelings. And every year we are treated to the sight of more limitations placed on Christmas.

In December 2004, Pasco county officials in Port Richey, Florida, banned Christmas trees placed in public areas of the county administration building. (The ban was rescinded two days later, after a public outcry.) And in King County, Washington, library administrators banned Christmas trees from the libraries in November 2004, explaining they didn't want to be insensitive to patrons who don't celebrate Christmas. They, too, rescinded the policy in a storm of protest. "We heard from the feedback that Christmas trees are a cultural symbol, not necessarily a religious symbol," said a chastened library official. But often the Christmas bashers get away with it. (Some muggers get away with it too.)

When the Kensington, Maryland, town council voted in 2004 to purge Santa Claus from its thirty-year-old tradition of lighting a pine tree in front of town hall (because, said the mayor, "two families felt that they would be uncomfortable with Santa Claus being a part of the event") the order stuck. Equally unfair, when in 2004 a New Hampshire junior high school student dressed in a Santa suit was told he was not welcome because the dance was a holiday dance and not a Christmas dance, the order stuck.

Residents of La Jolla, California, who objected to a proposal before the town council to change the name of the Christmas parade to holiday parade in 2004 were labeled anti-Semites by someone who wanted the town's parade to be more "inclusive."

And the mayor of Somerville, Massachusetts, apologized after a news release mistakenly referred to the December 21, city sponsored holiday party as a Christmas party in 2004.

Often the first shots of the battle are fired in schools. Many schools have either already changed Christmas trees into friendship trees or giving trees or holiday trees, or are considering it. Almost every where a school district is limiting what Christmas carols kids can sing or hear, or a district is considering it. Almost every where a school district has decided that kids cannot have Christmas parties, but instead must have winter parties; almost every where school administrators have either disinvited Santa or are giving him sidelong glances of suspicion, and in some schools the winter theme must be so completely universal that even the colors red and green are forbidden.

Whose fault is this? Well, for those who like to jump to conclusions, no, it's not just liberal Jews. I should state for the record that my Jewish son helped me research this book because he agrees that the war on Christmas has gone too far. The large number of foot soldiers waging the war on Christmas is in fact made up mostly of liberal white Christians, some of whom may have Jewish-sounding names (Cohen, Horoschak) that could mislead readers to a dangerous and very unfair conclusion. So let's restate for the record: The wagers of this war on Christmas are a cabal of secularists, so-called humanists, trial lawyers, cultural relativists, and liberal, guilt-wracked Christians-not just Jewish people. Muslims have spent their energies so far fighting for rights and against discrimination and are not big players in the anti-Christian movement.

Providing the legal muscle and pretzel logic to the anti-Christmas warriors are brand-name liberal institutions such as the American Civil Liberties Union (ACLU), the Anti-Defamation League of the B'nai Brith (ADL), and the Americans for the Separation of Church and State (ASCS). Some institutional backers of the war on Christmas are Christian churches, such as the Unitarians and the United Church of Christ who celebrate Jesus Christ's humanity and leave the room when the discussion turns to his divinity. These are the churches that marry gays and turn their backs on preborn babies. Their congregants vote for John Kerry, Ted Kennedy, and Barney Frank. They are liberal by definition, and they proclaim their liberal values; I began to connect the dots and discerned the outlines of the conspiracy.

The plot to ban Christmas itself is anything but secret. It is embedded in the secular "Humanist Manifesto" (in its three iterations from the American Humanist Association) in the philosophy of teaching of John Dewey, in the legal opinions of Laurence Tribe, in the rulings of the Ninth Circuit Court of Appeal on which sits the most liberal jurist in the land, Stephen Reinhardt, who is married to Ramona Ripston, the southern California ACLU executive director and the national group's most liberal and effective leader.

Excerpted from THE WAR ON CHRISTMAS: HOW THE LIBERAL PLOT TO BAN THE SACRED CHRISTIAN HOLIDAY IS WORSE THAN YOU THOUGHT by John Gibson by arrangement with Sentinel, a member of Penguin Group (USA), Inc., Copyright (c) John Gibson, 2009.