Honoring the Dark Lady of Sumer: A Book Review 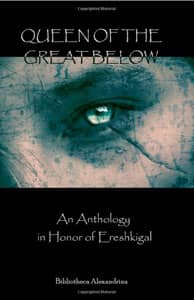 This was a very difficult book to read. In fact, I who pride myself on reading very quickly found it took me the better part of a day to work my way through this relatively slim volume. This is as it should be: Ereshkigal is not a Goddess to be glossed over easily. Words carefully crafted in devotion to Her should rightfully carry a wisp of Her weight and power. Janet Munin's extraordinary devotional does just that and more.  Queen of the Great Below: An Anthology in Honor of Ereshkigal stands as the first contemporary devotional -- perhaps the first devotional ever -- completely focused on this magnificent and little known Goddess. It is a wrenchingly powerful book, a transformative book, and one that properly glorifies the sacred stories of a very important Deity.

Most Pagans seem to know about the Sumerian Goddess Inanna. The story of Her descent into the Underworld is part and parcel of many an initiatory mythos, and She is a fairly "popular" Goddess. I have, however, encountered very few who know anything in depth about Her sister Ereshkigal and fewer still who maintain a deep and active devotion to the Queen of the Underworld. Ereshkigal's mysteries are about decay and rebirth, about humility and sacrifice, about paring down and having one's illusions torn away. They are about boundaries, and Janet Munin poignantly refers to Her as "the Goddess of the Sacred No," within this text.  Inanna is different; She's the Goddess of the sacred "yes" and that is much easier to approach, at least at first. Ereshkigal's mysteries are not so comfortable.

What this devotional does, however, is show not only the challenges -- the raw vulnerability this Goddess often demands of Her devotees -- but also the tremendous love and joy inherent in Her worship. In fact, it was the incredible intimacy of devotion winding its way throughout every piece, every account, every prayer, every poem in this book that I found most moving. That, I found to be the common thread tying the disparate submissions together into a cohesive, moving whole.

The book itself immediately strikes a chord simply from the cover illustration. We are presented with what looks like a fragment of an icon: part of a woman's face -- the bridge of the nose, a few wisps of hair, a finely sculpted brow, and an intensely penetrating eye. The face is lined with cracks and its colors are muted in the same way that antique portraits might be muted. This image, "Wrath of the Goddess" by Jerzy Chojnowski, is our first introduction to Ereshkigal, our first hint of the power lying dormant within the pages of this book. As many of the contributions remind the reader, She is an ancient Goddess, older even than civilization itself. Many of the contributions hint tantalizingly at this ancient power.

The majority of the submissions, of course, center heavily on the story of Inanna's descent. Rather than focusing on Inanna however, the wisdom of this sacred tale is told from the point of view of Ereshkigal and Her servants. There are several accounts from various contributors of the ways in which Ereshkigal claimed them -- some wrenching, some joyous, some somewhere in between -- and sometimes the ways in which She let them go again. Throughout, She is contrasted to Inanna. It is not a conscious contrast, but a facile one nonetheless. The reader cannot help it: Ereshkigal is the rock against which the wall of Inanna's Divine hubris is broken and that same paradigm holds true for many of those who sought Her out and who bravely recount their experiences in the prose and poetry selections of this book.

I was particularly surprised and gratified to see prayer-poems to Gugalanna and Nergal, Ereshkigal's two husband-consorts. I was more gratified to see the positive way Their relationship with Her was written about. They were partners and lovers instead of conquerors. Several of the offerings, such as Lee Harrington's "'To Stay a Seventh Day" and Janet Munin's "The Ways of the Underworld" even utilize traditional Sumerian repetition and rhythms to increase and highlight the dramatic impact of the story being told. I found this conceit both effective and surprisingly fitting in a contemporary devotional.

About Galina Krasskova
The author of several books on the Northern Tradition, Galina Krasskova is a Heathen priest, shaman, and devotee of Odin. She blogs at Gangleri's Grove.